It was a challenge this year to decide how we should celebrate Audrey’s 5th birthday. We’re in the midst of a pandemic and cases were at their highest to date, so we didn’t feel comfortable having a big party like we normally do. We tried to think of other ways to make her birthday extra special.

The girls have been asking and asking “when are we going to get to stay in a hotel again?” As we were driving past a hotel one day, they asked this question and it got my brain moving. Hotels are pretty safe. We wouldn’t have to be in close range with anybody and I figured the pool would be pretty empty at this time of year. We had also been wanting to go to the Birmingham Zoo to see the Chinese lanterns. So we decided to make a trip to Birmingham, go to the zoo, and stay in a hotel.

We still wanted to include our families though, so David’s sister Lindsey (who lives in Birmingham) offered to host a little family party at her house before we went to the zoo that evening. This worked out great! We drove down that morning and got to spend some time with Lindsey and her family while setting up for the party.

We decided to go with a “party animals” theme since we were going to the zoo + Audrey is a big animal lover. According to Audrey her favorite animals are 1. flamingos, 2. elephants, and 3. “all of them.” 😂 She’s the cutest.

I tried to keep the food and decorations very simple. I decided to do a couple desserts and a couple finger foods, but it still ended up being way too much food!

I decided last minute to make the cake pops since I had cake scraps and extra frosting. I’ve never been great at making cake pops…I can’t seem to get them smooth and perfectly round. But they turned out ok! 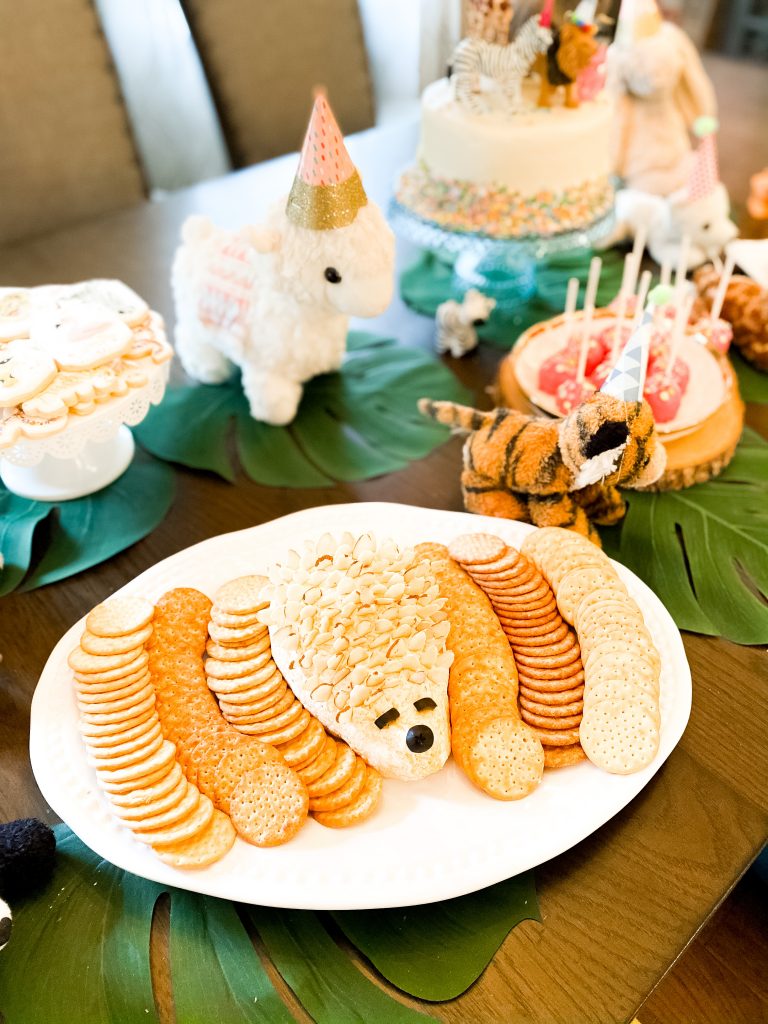 As for decorations, I found these animal balloons on Amazon. I decided to hang them from the ceiling behind the table. Audrey helped me gather up several of the girls’ stuffed animals and I made some party hats for them out of scrap book paper. Lindsey rounded up several of her daughter’s animals and put hats on them as well. I made little hats for the animals on top of the cake too and hot glued them on. All the animals were ready to party!

Lindsey found some light up floating flamingos at Target to put in the punch, which was PERFECT! Audrey loved it!

I had some matching shirts made for all four cousins at Whistle Britches, a local children’s boutique.

Glow Wild at the Birmingham Zoo

After the party, we headed out for the zoo. It was a perfectly chilly 36 degrees, so we bundled the girls up, and pushed on. It actually did not feel that cold until the wind started to blow near the end. The Chinese lanterns were very cool and the detail on them is incredible! We all had a great time. Even Hannah enjoyed riding kangaroo style in her WildBird ring sling and looking at the lights.

We finished up at the zoo around 7, ordered a pizza from a nearby pizza place – Davenport’s Pizza Palace – and went to check into the hotel. We stayed at the Embassy Suites in Birmingham. We had hoped to be able to swim, but the pool was closed for the evening. So we hung out in the room, ate pizza straight from the box (sooo good!), then we all climbed in bed to watch a movie and eat popcorn. The ultimate hotel experience!

The next morning we were told we could swim at 10. David ended up going out to grab donuts for breakfast before we went down to swim. I did some research before hand on whether or not public pools were safe (I had originally considered having her party at a local  indoor pool), and from what I read, the chemicals in the pool kill off Covid and other viruses. On top of that, viruses don’t naturally survive well in water anyway, so swimming in the hotel pool didn’t feel like a risk.

Side note – the fact that I feel the need to explain/justify our decisions, or even research this in the first place, really bums me out. Who else is ready for this virus to be gone so we can do normal things like celebrate birthdays without fear of being judged? 🙋‍♀️

We swam for a little while, took showers, then checked out and headed toward home. We had planned to stop at Whataburger in Fultondale on our way home, but realized there’s a Mugshots there now! Did yall know this?! Mugshots was our favorite restaurant when we were at Alabama, so of course we decided to stop there for lunch. No way we’re passing up that opportunity! And it was every bit as good as we remembered. Totally worth the extra time on our trip.

I hope that this will be a birthday to remember for Audrey. I thought she may be bummed about not having a friend party, but she was very excited about all the other things we got to do. We’ve never really done experiences for birthdays because we’re such big party people, but I think the kids love experiences just as much.

You may also enjoy: