It’s been a while since I posted a “bumpdate” and believe it or not, my pregnancy is almost over! In fact, we are scheduled to induce ONE WEEK from today. Because of the pandemic and being restricted on activities all summer, this pregnancy has felt looooong. Finding out we were pregnant and telling friends and family feels like forever ago because the world was literally so different. There were no masks and “social distancing” was unheard of. I wish so bad we could get back to that normal, but I’ll take what little bit of normalcy I can get at the moment (amen for schools being back in person!)

I’ll start with what’s been going on with the pregnancy, then I’ll share a bit about what we’ve been up to the past few weeks. At around 34 weeks I started having some issues with high blood pressure. My OB wanted me to start coming to the office weekly at that point to monitor it more closely. This only added one extra appointment, so it wasn’t that big a deal. I started monitoring my BP at home and one Sunday morning I had a headache that wouldn’t go away and I noticed that I had holes/blurry spots in my vision. I checked my BP and it was 155/105. I decided I would sit and watch our church’s live stream and if it was still up after sitting still with my feet up for an hour, then I would call the doctor and see what they wanted me to do. They suggested I go to the OB Emergency Department to make sure everything was ok.

Thankfully, everything was good on my labs, there was no protein in my urine (signs of preeclampsia) and baby looked good on the monitor. They ended up giving me some medicine for my blood pressure, which brought it down, and they sent me home.

Since then, my OB put me on labetalol, which initially didn’t do much, but after increasing the dosage last week, has helped bring it down some. The first couple of days after the increase I felt terrible though! I’ve heard people say that beta blockers make them tired and boy, that’s no joke! Thankfully it only lasted a couple days, then my energy level came back up. I’ve actually felt better the past week than I have the last 3 months of my pregnancy. I guess it’s all that nesting energy that you get toward the end. I’ve been able to get quite a bit of housework and other things done to get ready for baby, and I’m so grateful for that.

Because of my pregnancy induced hypertension (PIH), my OB wants to induce between 38-39 weeks. If I understand correctly, this is the “tipping point” where PIH can turn into preeclampsia and be harmful for the baby. For that reason, we’re inducing 11 days early and instead of an October baby, her birthday will be September 30 (which means three September birthdays in our family!)

I was hoping for more space in between Raley and Hannah’s birthdays (Raley’s is Sept. 25), but it is what it is. I like to make birthdays extra special because it’s the only day that’s solely YOUR day, so we’ll have to work hard in the future to not lump their celebrations together. I want them both to feel special and loved on their own day.

We’ve got the nursery ready, bags packed, and we’re ready to meet her!

So what have we been up to lately? I am beyond grateful that our school system decided to go back in person. For the first month of school they were doing virtual learning, and it was a little challenging juggling live classes, small groups, videos, crafts, and assignments. But I also felt like they weren’t getting as much out of it. I’m not saying anything negative about the teachers, because they did a great job, but there’s nothing like learning in the classroom. I’m so, so happy they decided as quickly as they did to go back in person, and so far, we haven’t had any issues besides being more tired than normal, which is typical when they start school anyway. Their brains are not used to having to pay attention and having to think this much each day, so it’s expected that they would be more cranky than normal. It’s even harder this year since they’ve had extra time at home. We try to remember this and have a little bit of extra patience and grace when they melt down over little things.

I was nervous for Audrey starting at a new school this year. There’s so much new for her – new school that we never got to walk through to become oriented with, new teacher, masks and weird distancing rules, new classmates. longer days. But this girl is the most adaptable person I know and she is loving her school and her teacher (I knew she would, her teacher is the sweetest!). I’m so proud of her! And I love getting pictures from her teacher during the day 🙂

A couple weeks ago I was able to have a mom’s night out with some good friends for mine and our friend Sarah’s birthdays. We went to Chuy’s, pretty much closed the place down, then sat on the back porch at a friend’s house and chatted until way too late. It felt so good to have that time to catch up and just relax.

My birthday is September 12, but the way our schedules worked out this year, we ended up scheduling Raley’s birthday party on my birthday. David had planned a special surprise celebration for me with the help of the girls, which we did a couple days before my birthday. Like I said, I like making a big to-do about birthdays, so for David’s birthday each year I take the girls with me to pick out some sort of themed birthday decorations that they think he would like (last year was Super Mario Bros) and we have ourselves a little family party.

This year Raley was very insistent that David do the same for me and he was all on board, so one afternoon, David took them (secretly) to Party City to pick out some decorations and other cute party items for my birthday. It was so thoughtful and sweet and they made me feel like a princess! They even got a pinata and a special glow stick to hit it with. I had a doctors appointment late in the afternoon this particular day, so David secretly ordered Rosie’s (my favorite Tex-Mex restaurant) and picked up a cookie cake while I was out. I literally could not have asked for anything better!

The weekend of my birthday my brother, sister-in-law and their daughters came into town for Raley’s birthday party. They surprised me with a little family baby shower, which was so sweet and thoughtful!

In case you missed it, you can head to this post for all the details from Raley’s party with Southern Sleepovers Alabama. The girls had a blast!

This past weekend we decided last minute to go apple picking at a nearby orchard with my sister and BIL. We had never been apple picking before. It’s always something that I want to do, but we tend to put it off because it’s typically very hot until a week or so into October. This weekend the temps got down into the 70’s, so it was the perfect time to go before we’ll have an extra little one in tow. I’m thinking 2020 is feeling guilty and doing us a favor by bringing an early fall. 😉  (Please, Lord, keep it this way!)

On Sunday after church we went to David’s parents’ house for a little birthday celebration for Raley. His sister Lindsey and her family were not able to make it to her party last weekend, so they planned a special little family celebration for her, which she LOVED!

They had also planned a surprise family baby shower for me and Hannah, which was so sweet and very much appreciated! This pregnancy has definitely been different, not being able to celebrate with friends and family all together at a shower. There have been several  babies born to families at church and I’ve missed being able to do these types of things with the new moms. COVID pregnancies definitely have their challenges and are unlike anything else.

The girls left Gigi and Pops’ house on Sunday covered head to toe in dirt. They spent quite a while digging in their rock garden and burying their hands and feet. I think it’s so cute when kids have dirt on their faces. It usually means they had a whole lot of fun! 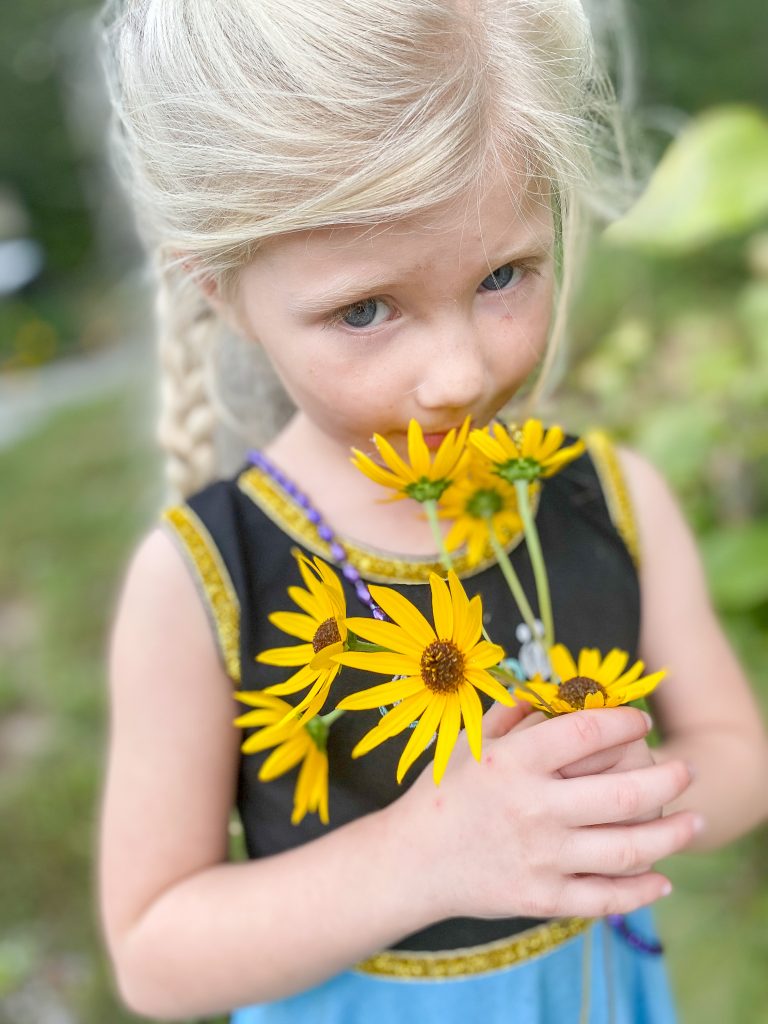 That’s about it for now! Our schedules have gotten a bit busier, and actually feel somewhat “normal” with being back in school and starting dance and gymnastics. The normal mixed with the not-normal (wearing masks everywhere you go, making sure your kids have their masks on when they get out of the car at school, worshipping from home, not being able to go and do things we’d normally get to do) can be really off-putting sometimes. I totally understand, and support, the masks because I know that it’s helping keep numbers down, but I still really hate them. I hate seeing kids wearing them, I hate not being able to see people’s smiling faces at the grocery store. I hate that the kids can’t see their teachers’ expressions at school. Sometimes it just hits me and makes me angry that this is where we’re at right now in the world. I guess all we can do is wait it out and pray. I just need to be thankful that we’ve got some sort of normalcy back.

I hope you have a great rest of the week!