Holy Moly! The past week has been FILLED with all the Halloween activities, and I have been loving every bit of it! I think I’ve mentioned before that it’s hard for me to pick a favorite holiday between Christmas and Halloween because I love them for such different reasons. I enjoy all the creepy, gory, supernatural things that come with Halloween, and of course – the best part – dressing up! I tend to get a bit sad when Halloween is over, but this year, I’m about Halloween’d out. We went to more Halloween events this year than we normally do, so I feel like I got my fill of it and now I’m ready to turn on the Christmas music (I’m not even kidding).

Today I’m going to share all the Halloween fun with you! What was your favorite Halloween activity this year?

This year the girls decided they wanted to be Elsa and Anna, and surprisingly there was no fighting over who was going to be Elsa. Audrey is surprisingly good at picking the opposite of what her sister picks (which is usually a good thing). So when Raley said she wanted to be Elsa, Audrey said “and I’ll be Anna!!!” My kids are planners like me and I’m pretty sure that they’ve had these costumes picked out for almost a year. 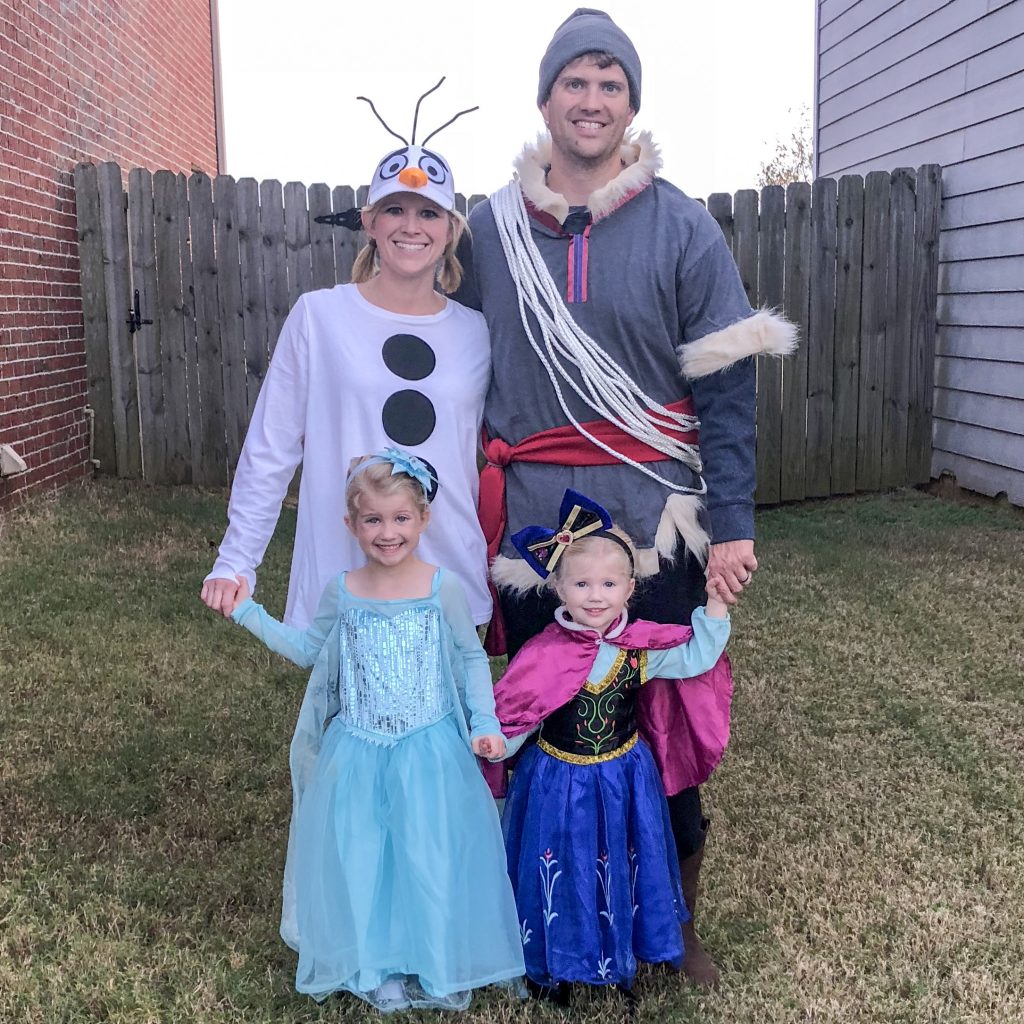 We’re huge fans of family costumes, so it seemed only natural that David dress up as Kristoff. I had the option of Olaf or Sven. Olaf seemed like an easier costume to make, so I went with that! And actually, I made my costume for less than $12, so it worked out great (tutorial coming soon.)

We kicked off this series of Halloween events with a Halloween Bash at Early Works Children’s Museum. We went to this event a couple years ago and it was at Constitution Village, but this year they moved it to Early Works. I definitely preferred this location. It was easier to navigate through. They had fun little games set up all throughout the museum, a Charlie Brown movie to watch if you wanted to sit down and take a break for a minute, and they had the typical museum activities that you could enjoy. 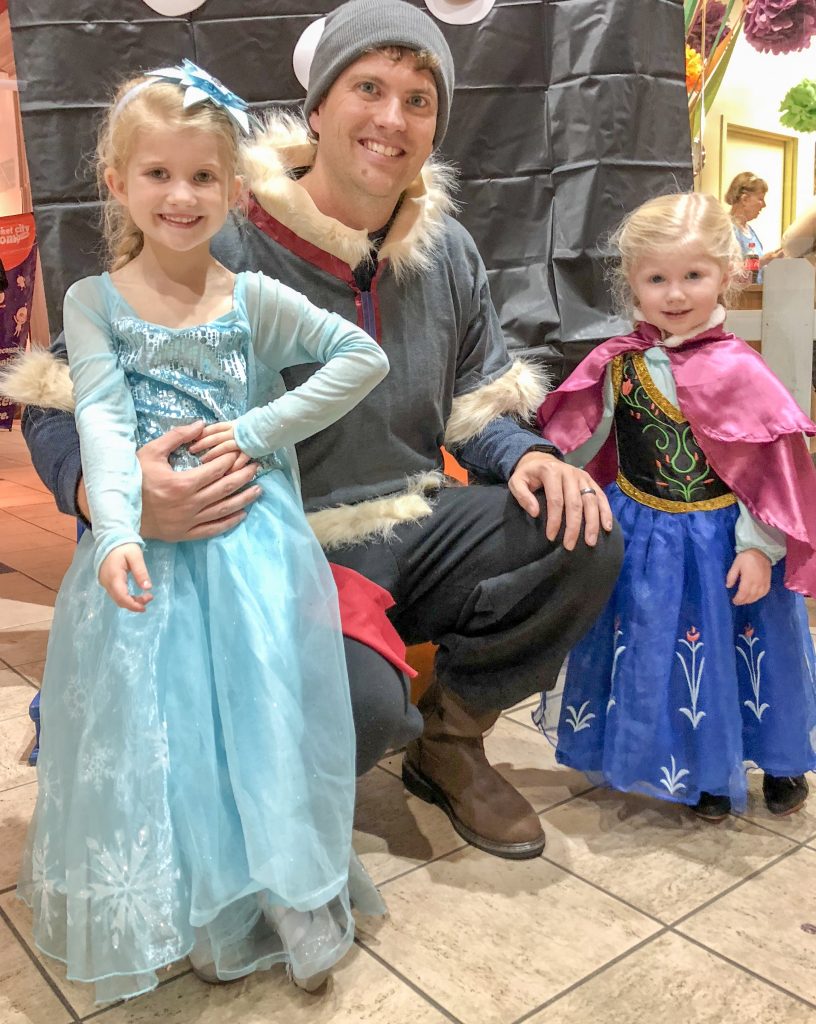 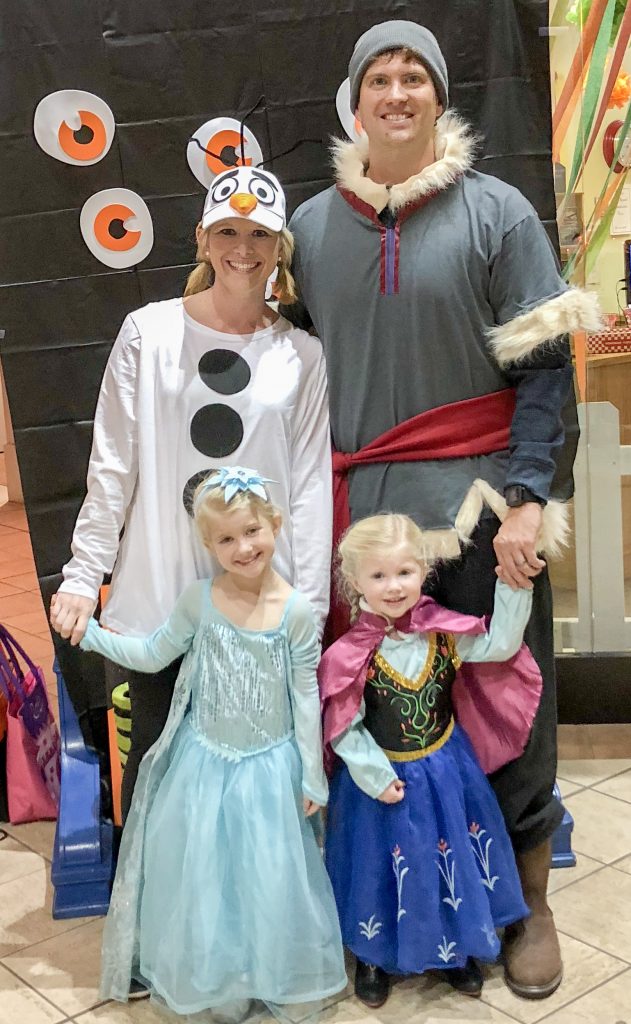 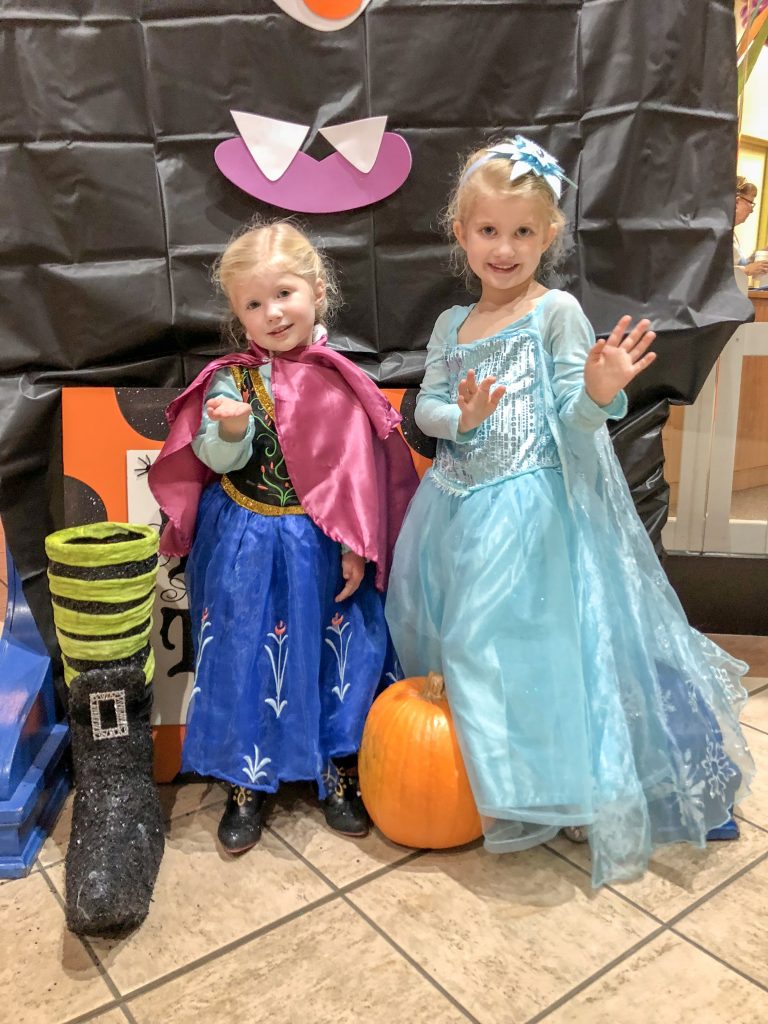 Saturday  morning was our annual fall festival at church. This is always a fun event with live music, inflatables, games, and home cooked food. This year they even had a petting zoo! There was a sweet little kangaroo, a camel, a little grey cow, miniature horse, goats, and sheep. The girls enjoyed feeding the animals. I think I could have cuddled up with that kangaroo and taken a nap. He was so sweet and so soft! 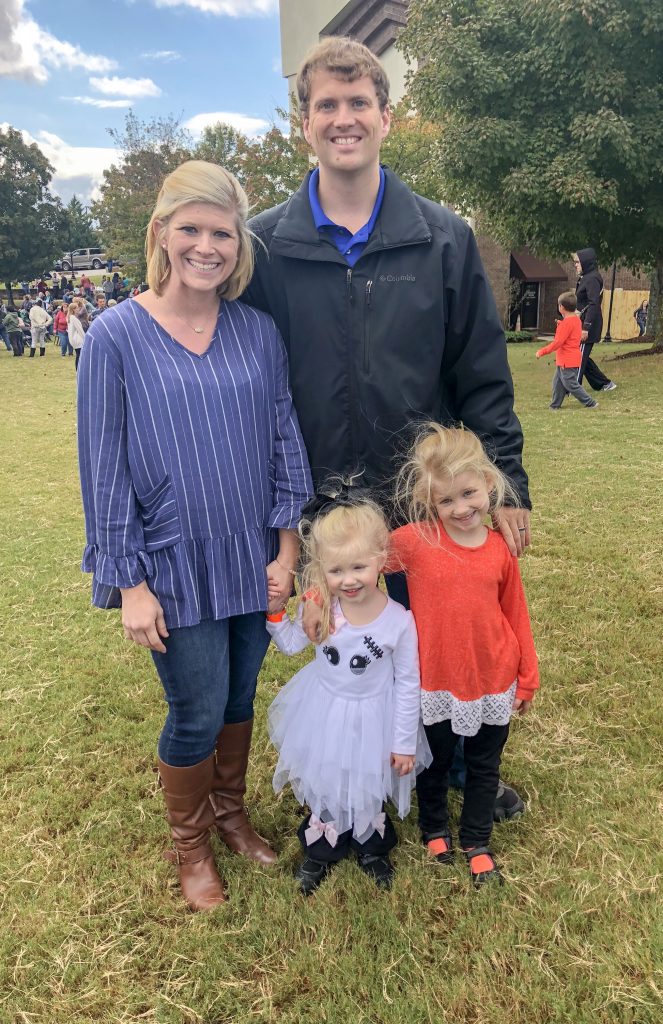 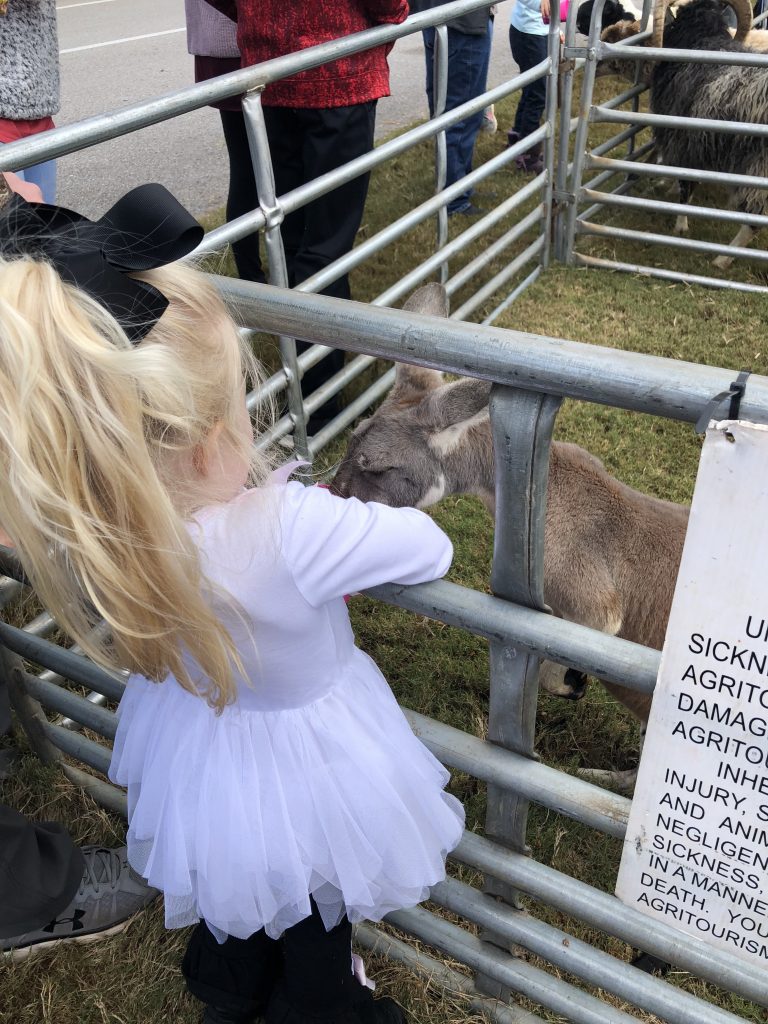 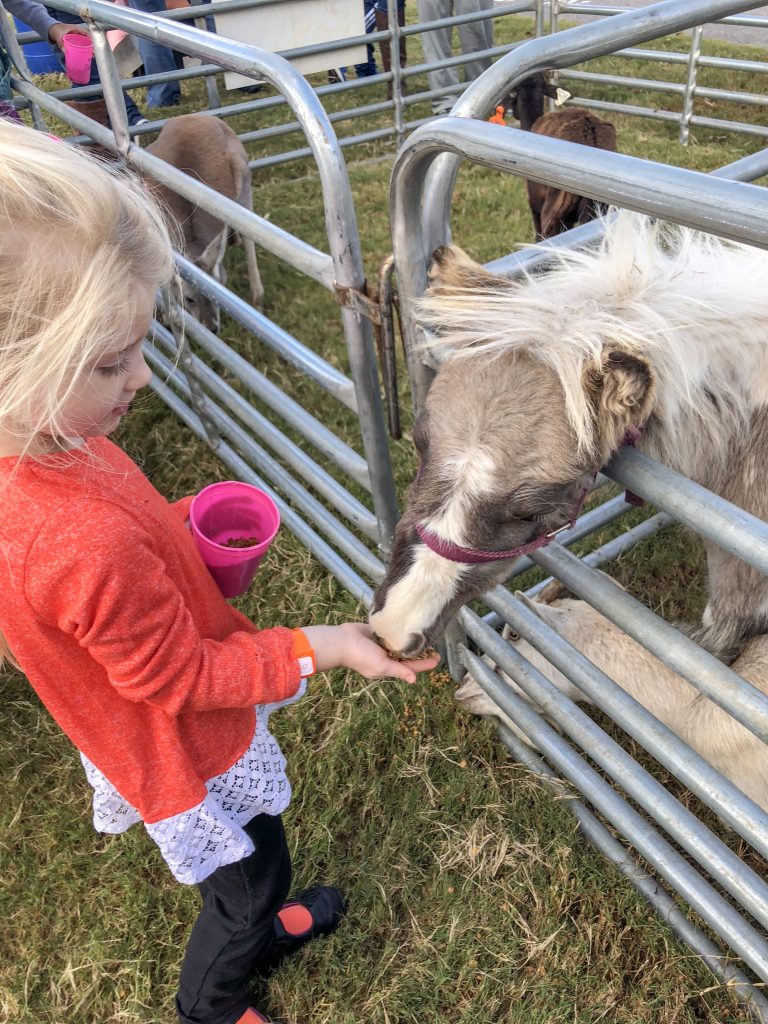 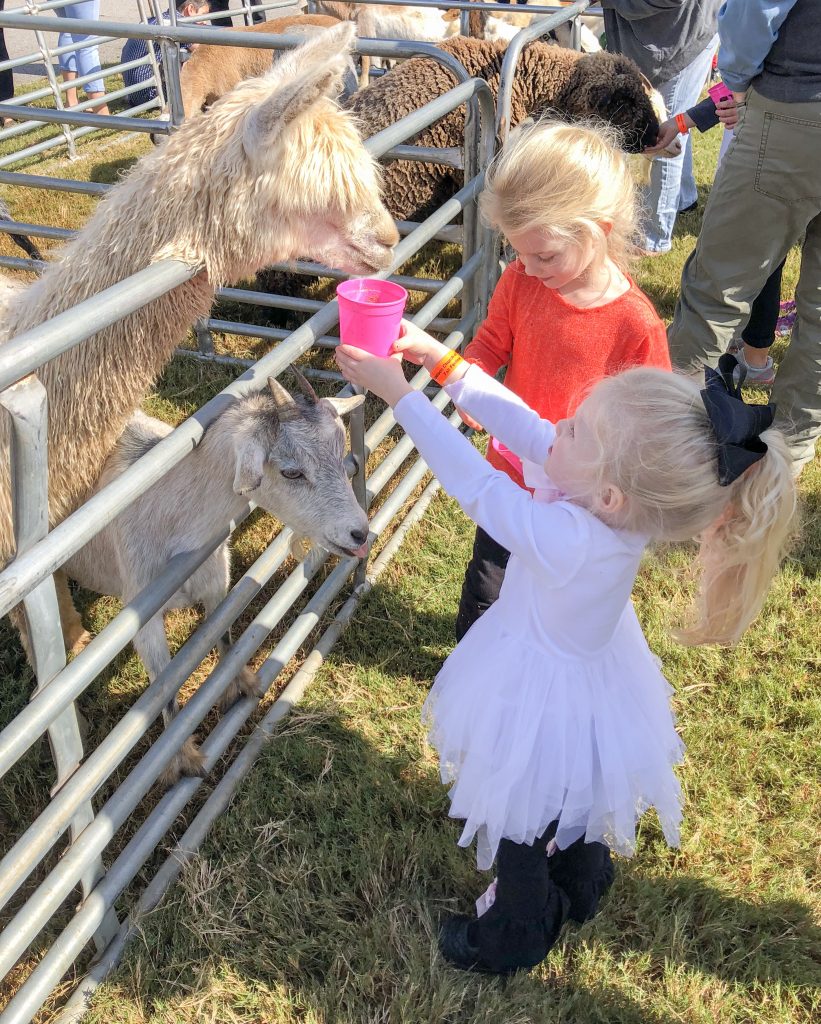 After the fall festival, we took the girls to my parents house, where they spent the rest of the day and night. David and I went back to the house to chill for a bit before going to the Medical Gala that the hospital puts on each year. I have always wanted to go to the gala, but we’ve always either been busy or out of town. We met some friends from work at a Mexican restaurant for dinner before heading to the gala at the VBC.

We had an absolute blast! There was a band comprised of several doctors, nurses, and other hospital employees. Many of them were dressed up like creepy clowns. It was just fun to go out with friends from work, and to see old co-workers that we hadn’t seen in a while. 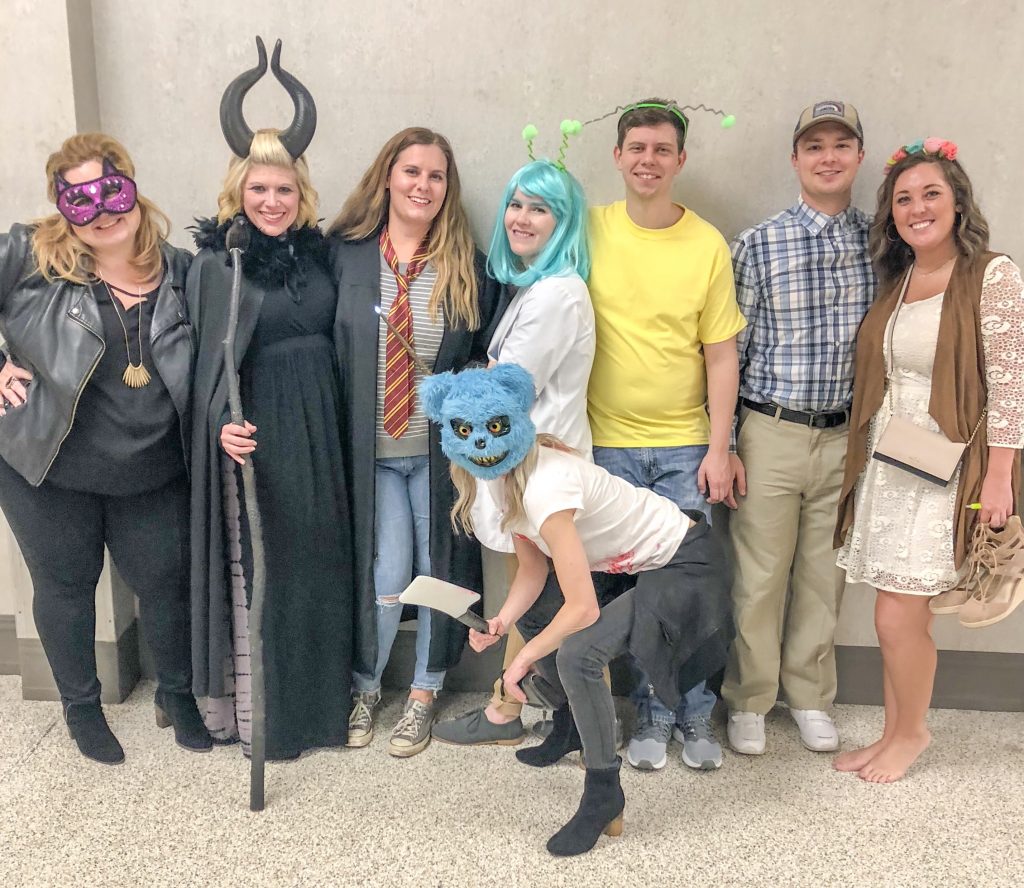 Sunday evening, our church had their “Trail of Treats.” We ate some delicious soups and sandwiches provided by some of the members of the congregation who don’t have young children anymore. Then we walked around to all the cars for the girls to get candy. Raley and her friend Ann-Elise were adorable walking around holding hands.  My parents decorated their car to go along with the Frozen theme and it was so cute! 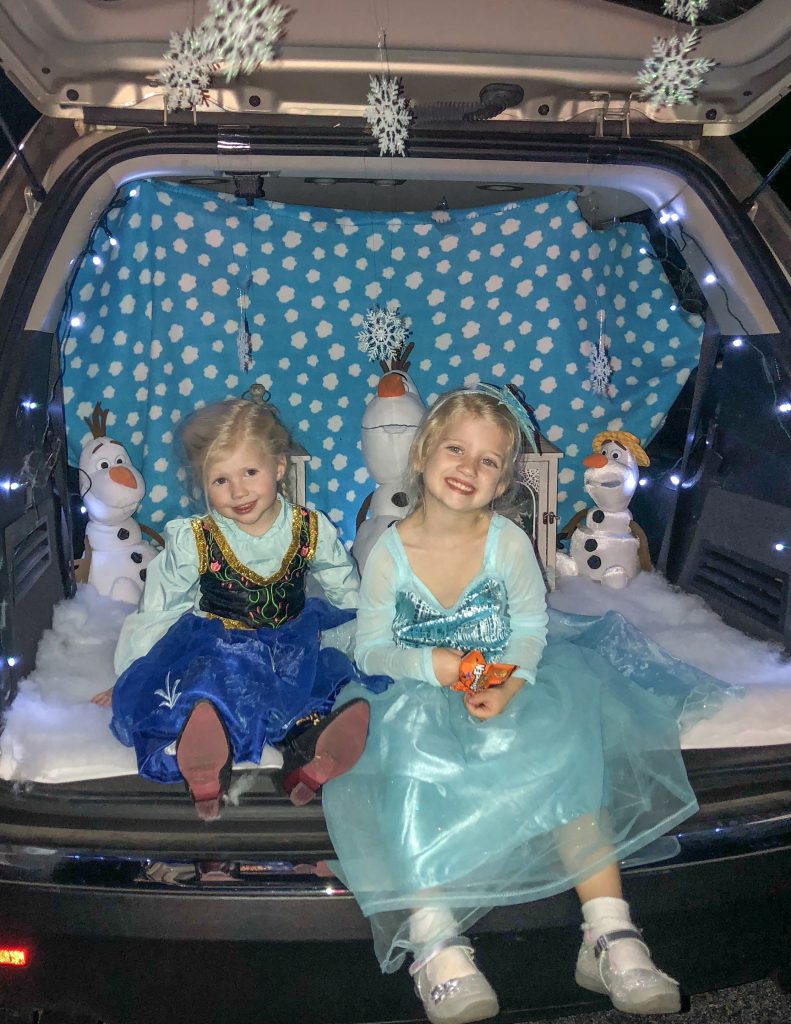 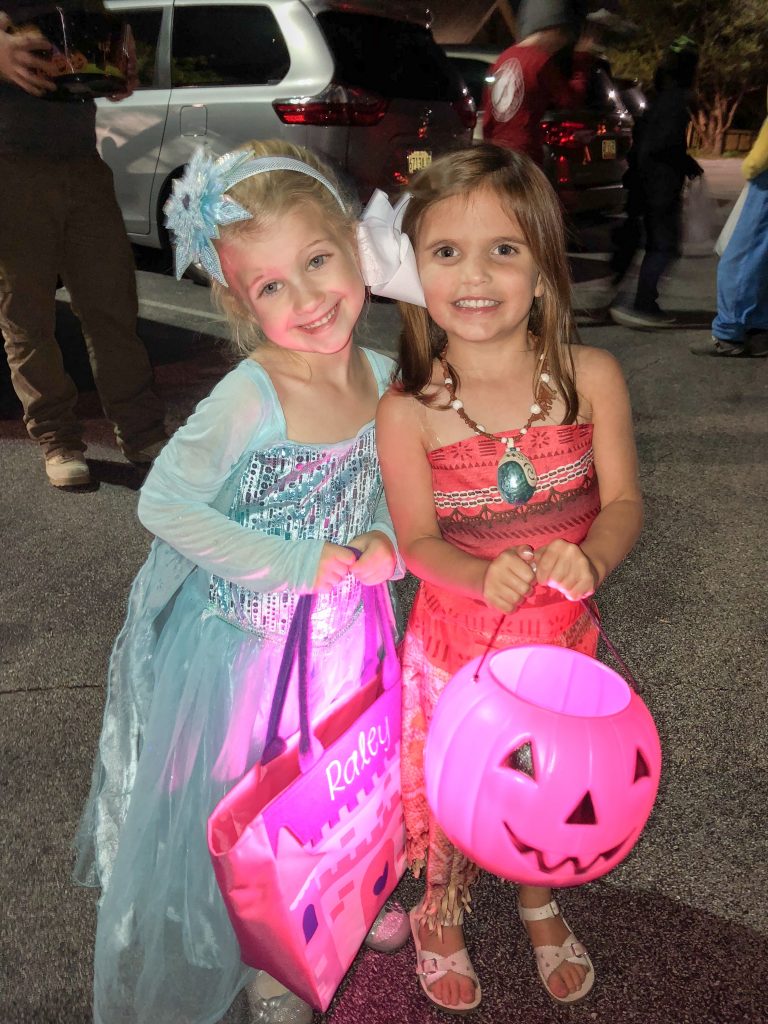 After we’d visited all the cars, the girls ran around and played with their friends for a bit and went on a hay ride. This is always such a fun time to spend with great company from church. 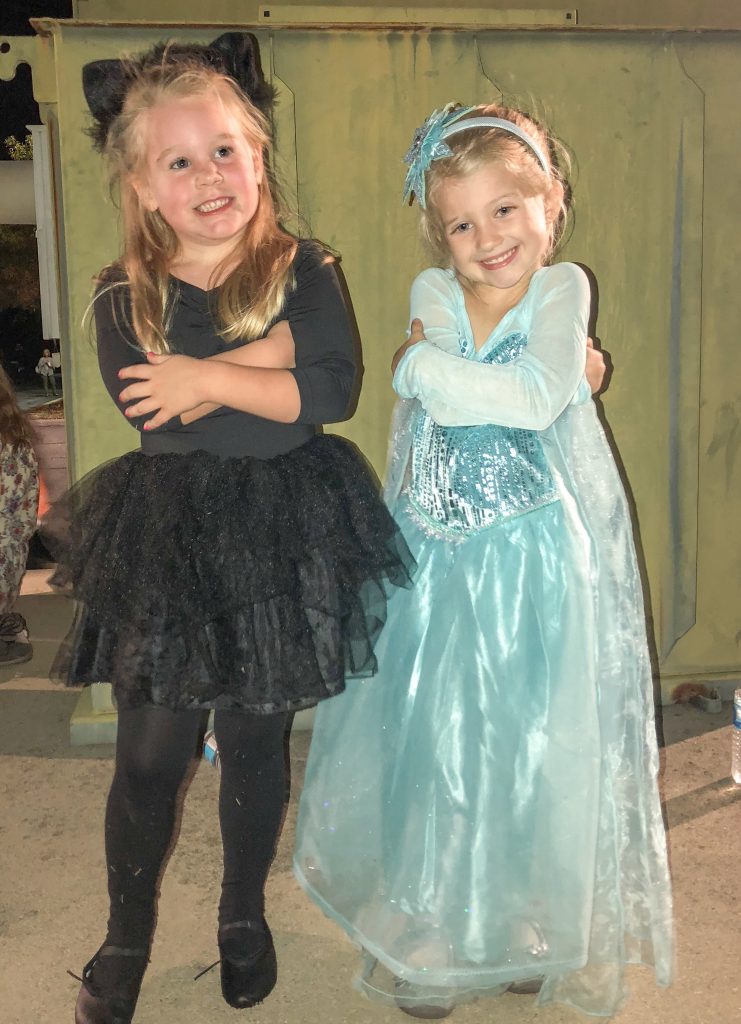 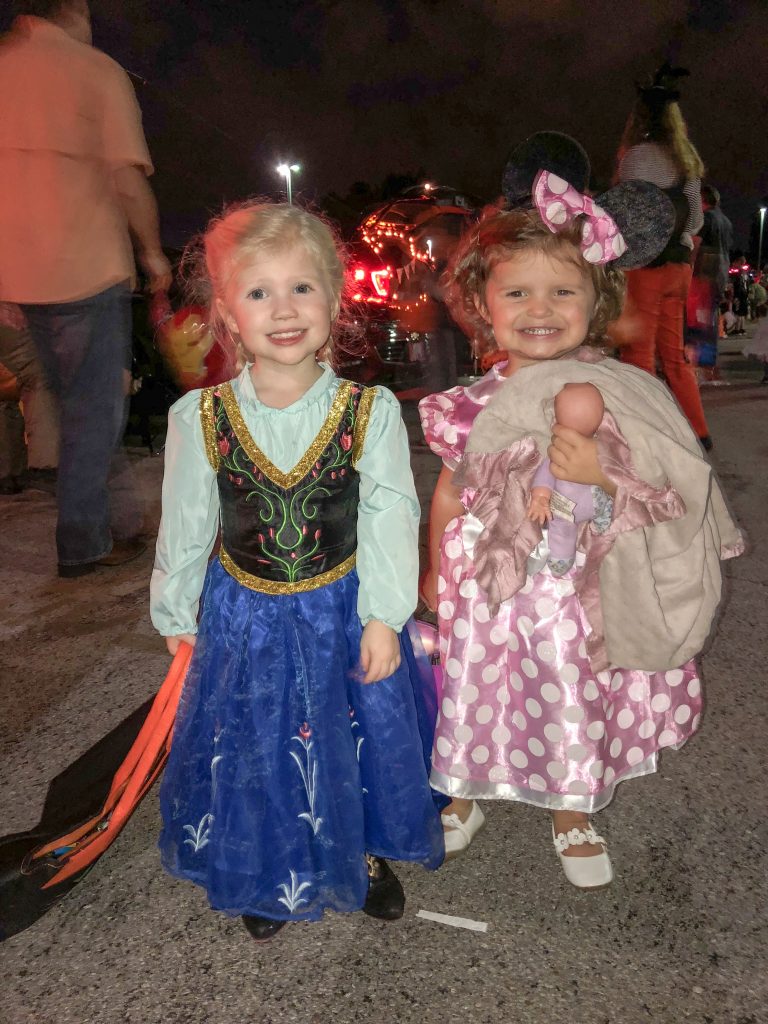 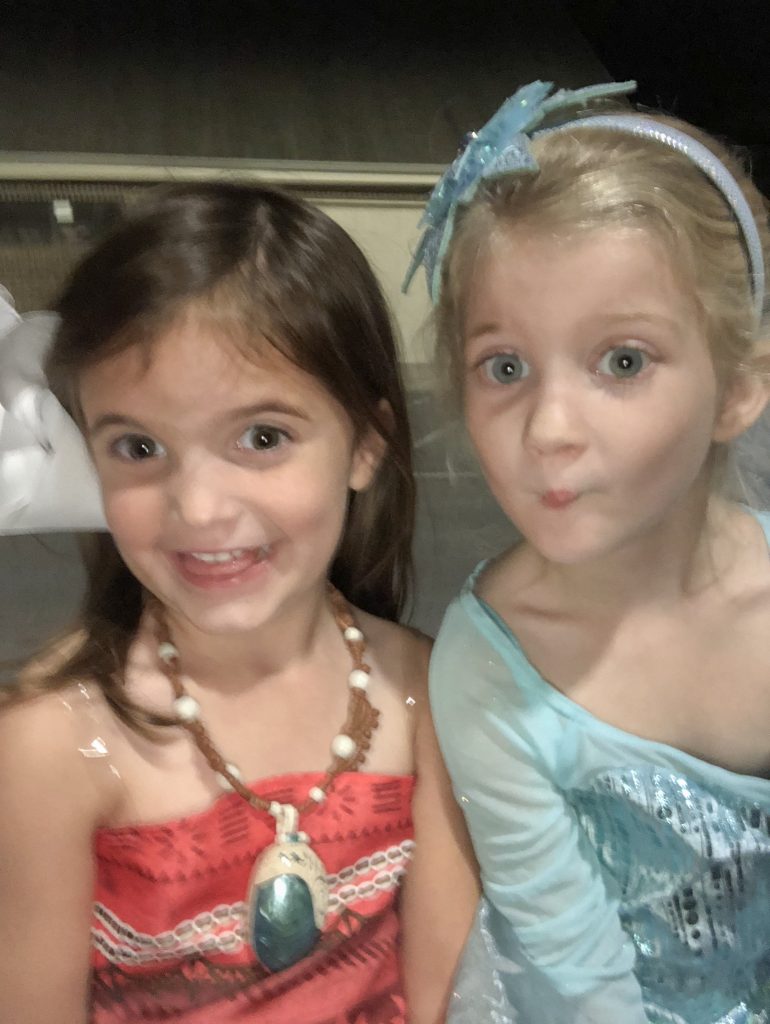 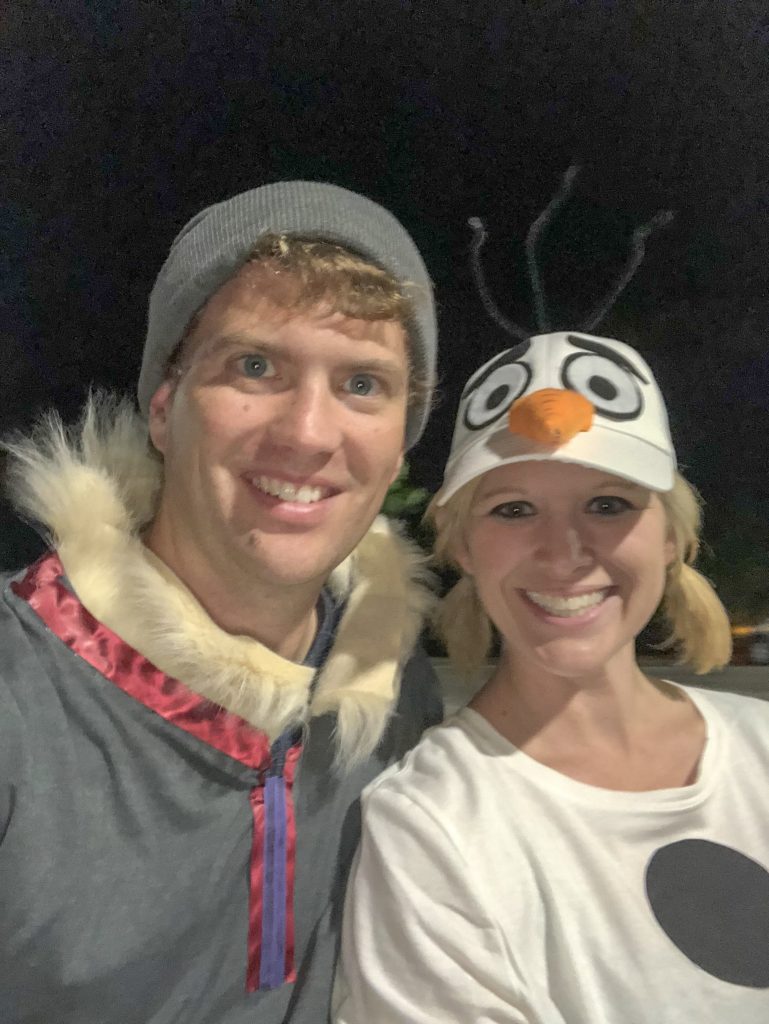 Tuesday was the girls Harvest Festival at MMO. They both decided that they wanted to dress up as something different for their school party, which was totally fine by me! Audrey picked Tinker Bell and Raley said she wanted to be a ballerina. Audrey’s costume was easy! We already had a little Tinker Bell dress up, the shoes that I had found at a consignment sale for Raley several years ago, and green wings from Raley’s birthday party. All I had to do was put her hair in a bun! 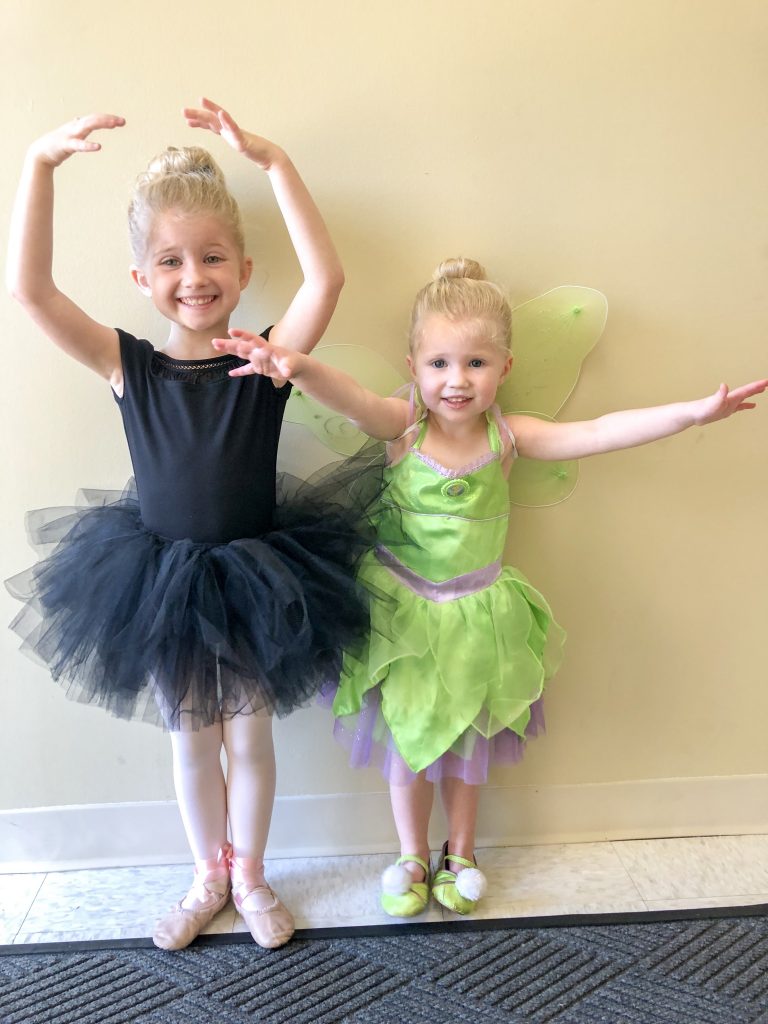 Raley’s costume was easy to throw together too. It was deciding which leotard she would wear that was the difficult part. She was insisting that she wanted to wear an old hand-me-down leotard with princesses on it. The problem is that the princesses are peeling off and it’s a bit too big for her still. She was getting major attitude with me when I told her she couldn’t wear it. Then she couldn’t decide if she wanted to be a ballerina with a different leotard or something else. Anyway, through alot of back and forth we landed on a costume. I told her I would go to the ballet store and see if I could find her a “big girl ballerina tutu” for her to wear so she’d look like a real ballerina. 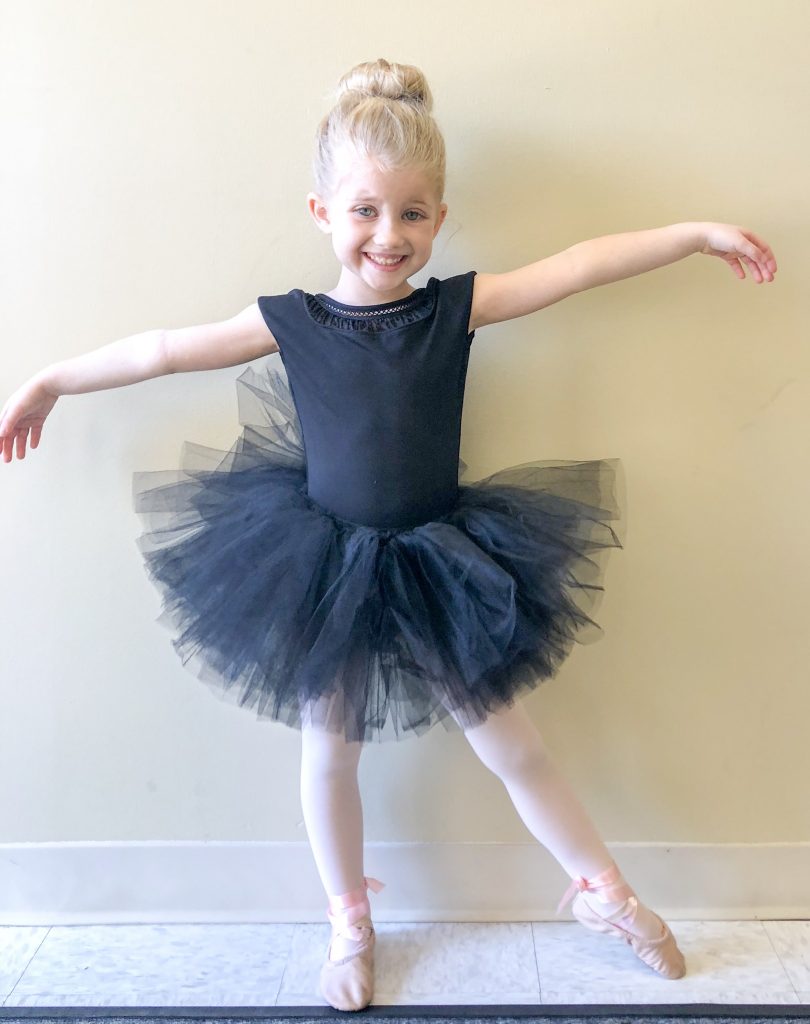 I went to Pointe Dancewear in Madison while she was at school and found the perfect little black tutu. I also put some pink ribbons on her ballet shoes to make them look like pointe shoes. She ended up being happy with her final costume. Maybe I’m a bad mom for not letting her wear what she wanted to wear….I don’t know. But she ended up looking adorable. And they had a great time with their friends at the party. 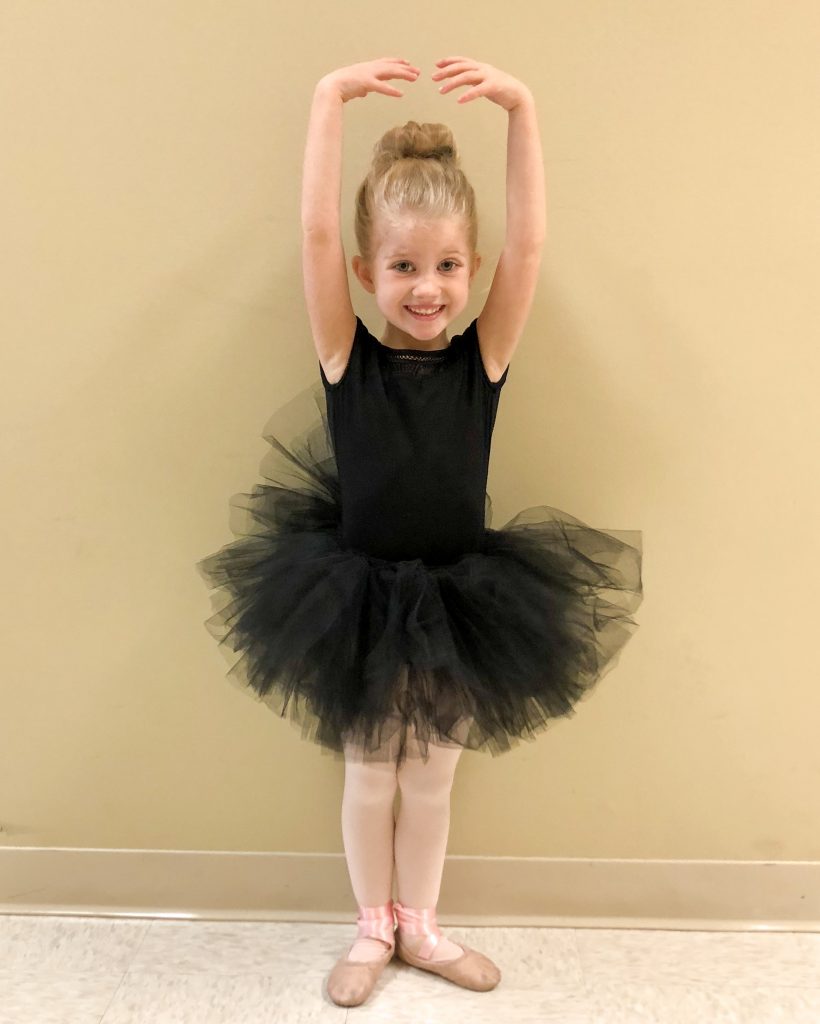 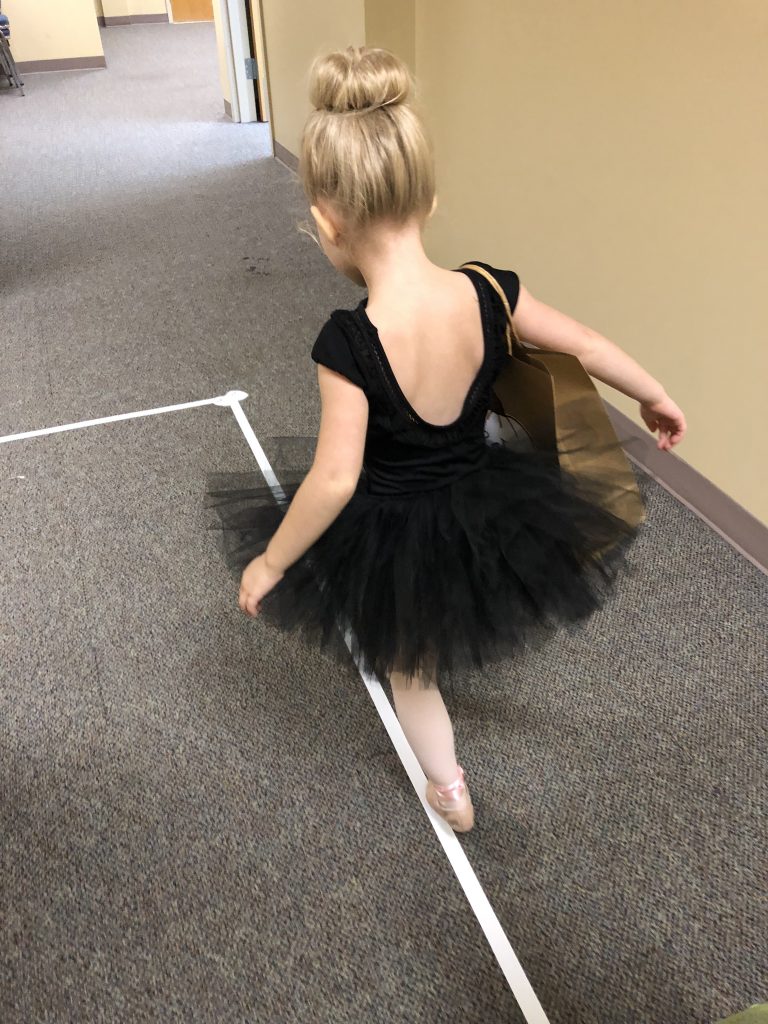 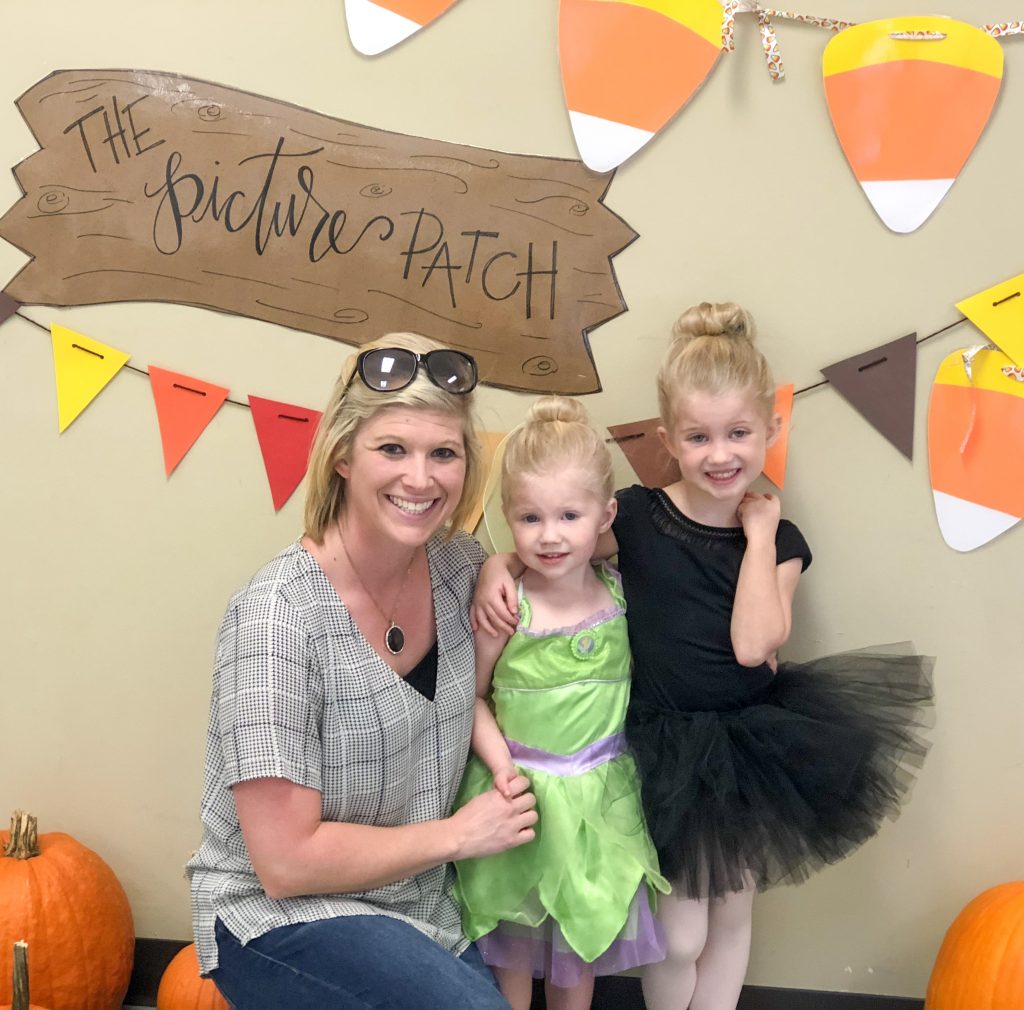 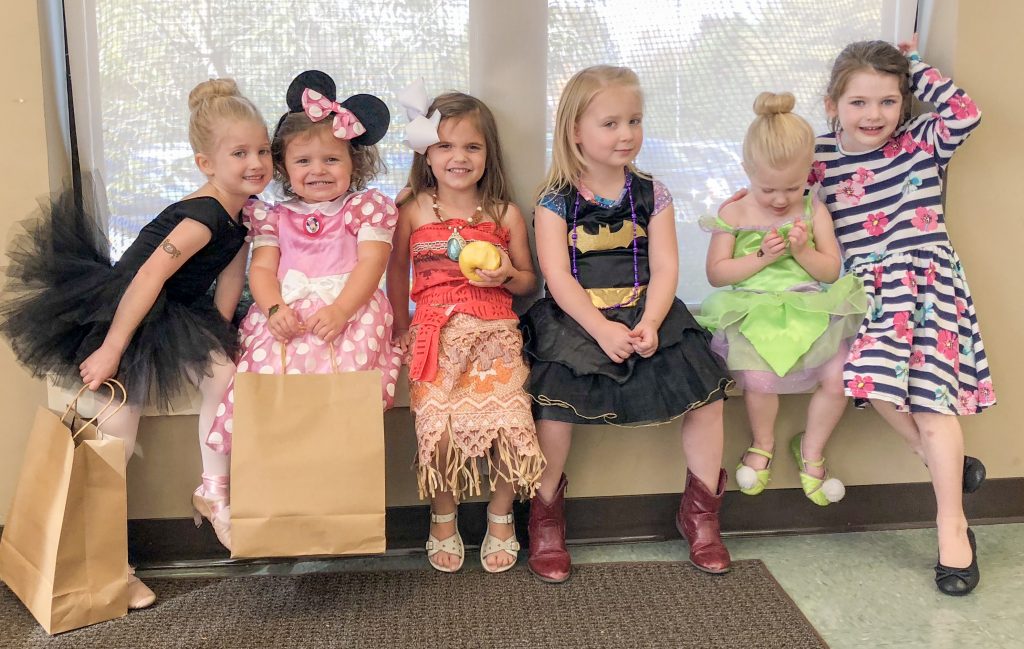 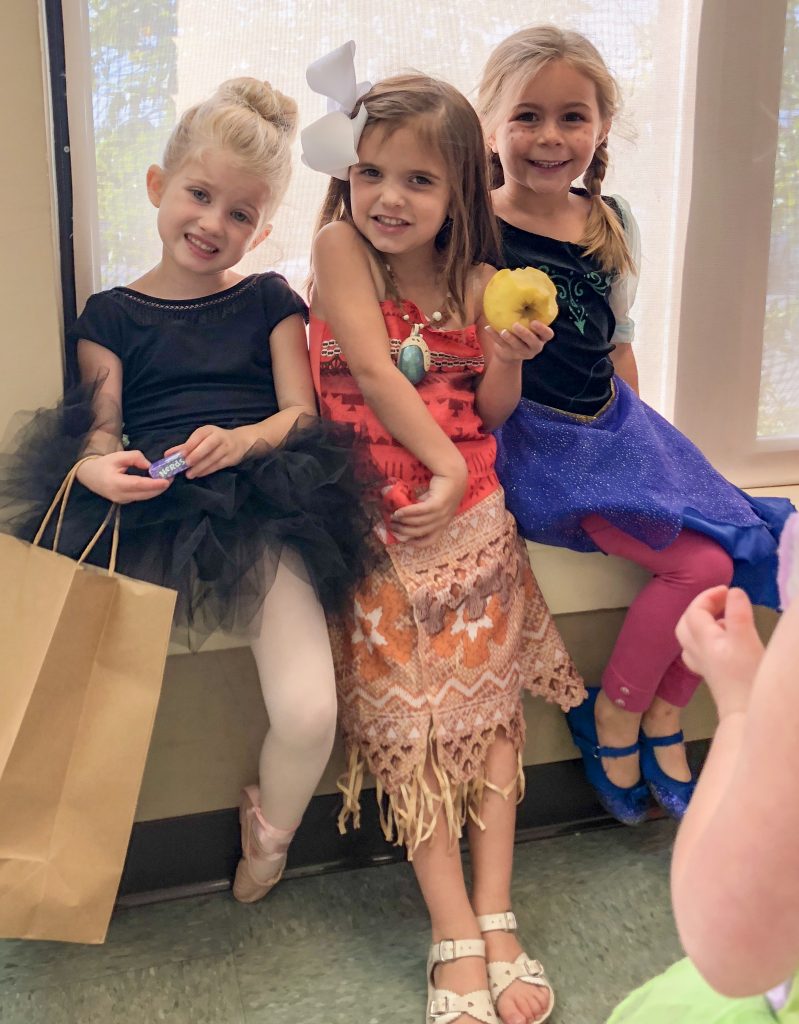 Last on our Halloween activities list was actual Halloween! David came home from work a bit early and my parents came over to go trick-or-treating. Our neighborhood is FULL of kids, which I LOVE! It’s so much fun to see so many families out trick-or-treating. It’s like a scene out of Hocus Pocus. I was unsure as to how it was going to go at first because we were having trouble listening, but I think they were just really excited. Once we got going they did great. Audrey ended up getting tired, and her bag was getting heavy, so she got a bit pokey toward the end. I think we were out for about an hour and a half and probably didn’t even hit a quarter of our neighborhood! 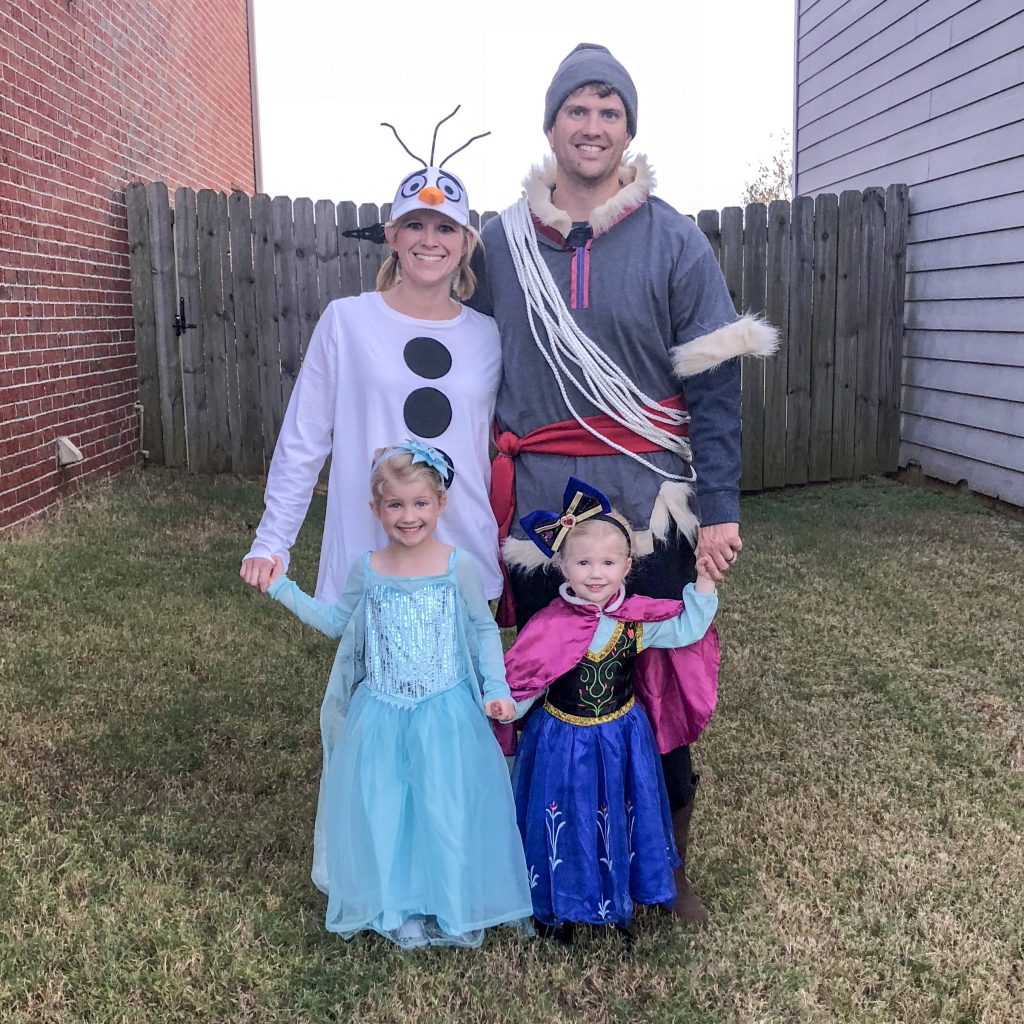 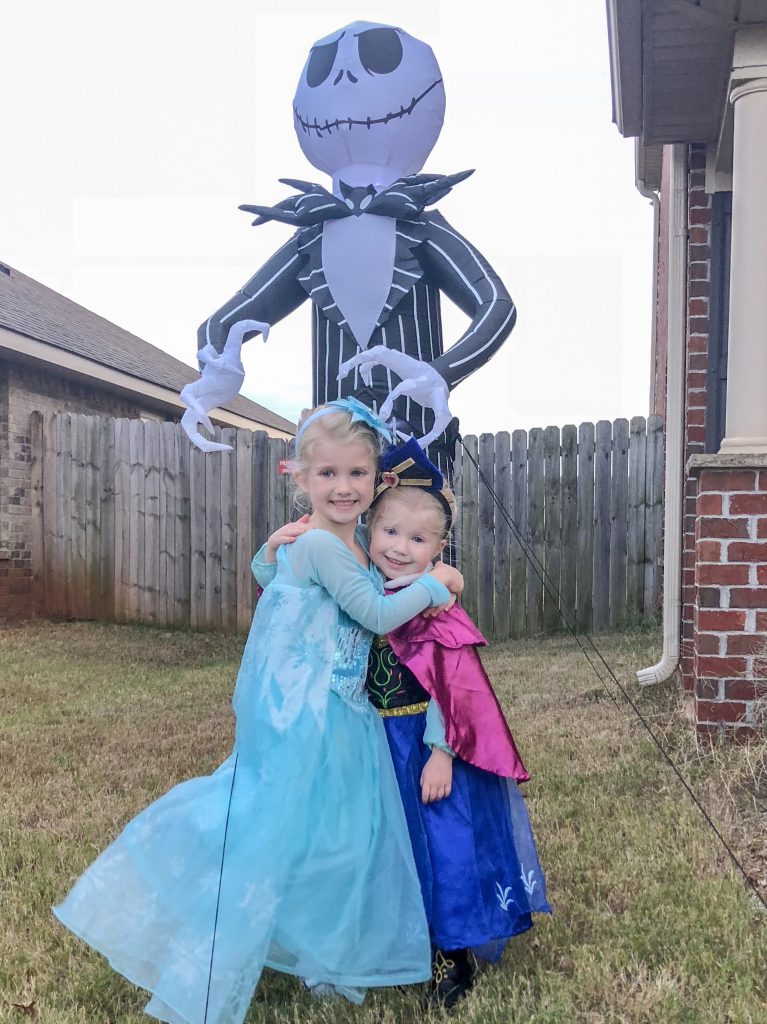 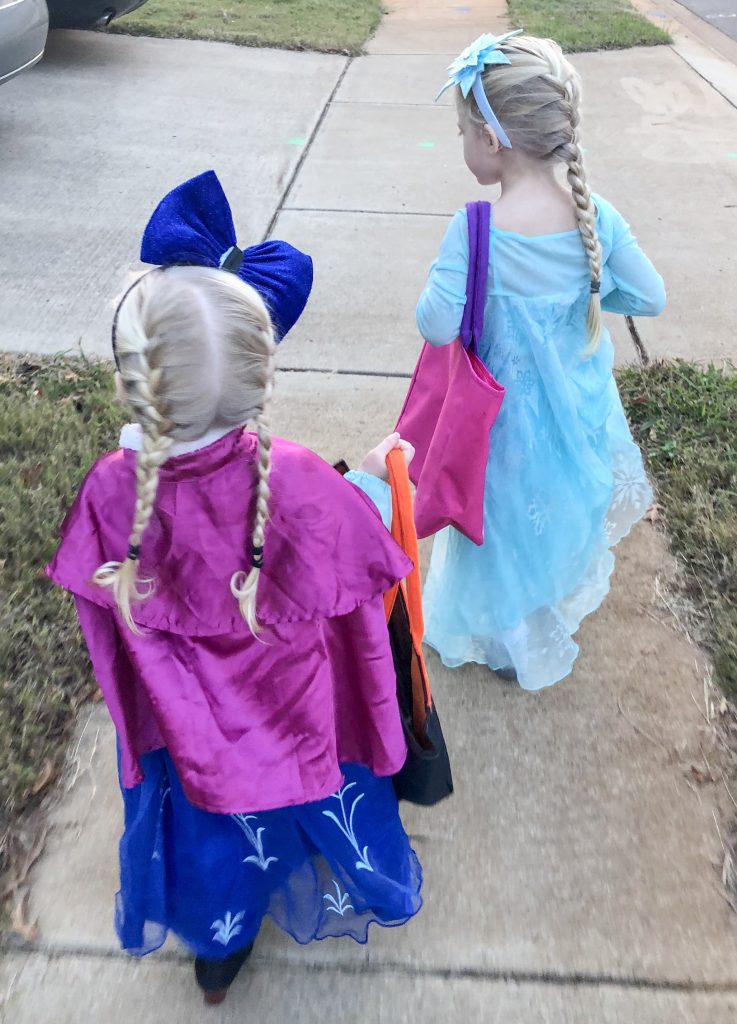 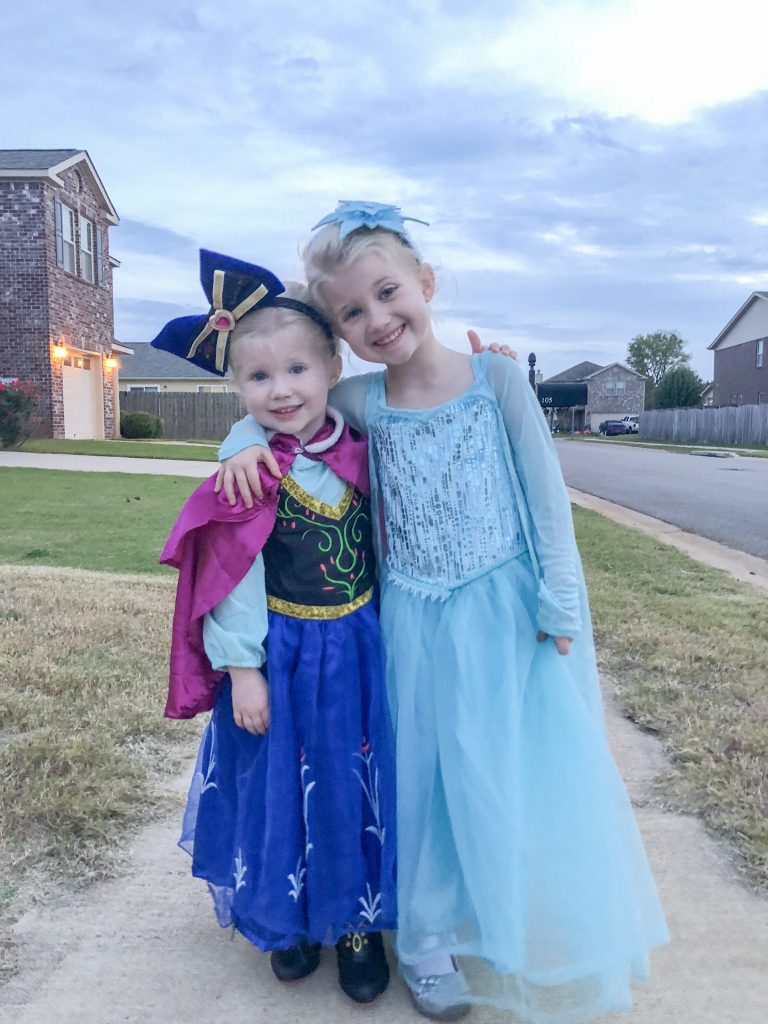 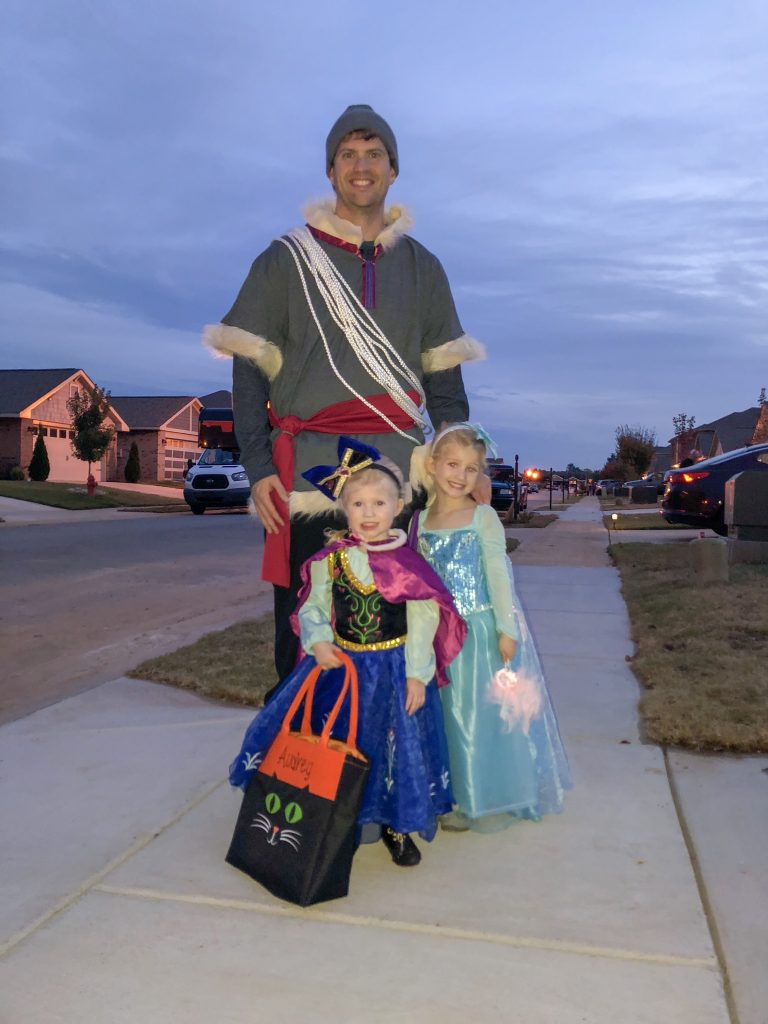 Once we were all tired and hungry, we made our way back to the house and enjoyed some chicken enchilada soup and cornbread, while Hocus Pocus was on in the background (because what other movie would we watch on Halloween night?) The girls kept asking for more candy and we thought, why not, it’s Halloween! Let them have fun. We did make sure to look over the candy before letting them eat it though.

That’s our Halloween in a nutshell! What is your favorite Halloween activity? Do you trick-or-treat in your neighborhood or do you go to a local trunk-or-treat? Do you limit your kids candy intake, or let them have at it? (My kids are still slow eaters, so really, they didn’t have that much. I’m sure as they get older I’ll have to watch them more closely!)

If you enjoyed this Halloween post, you may enjoy visiting these posts from years past: