Hello, and happy Monday from my brand new site! This is my first post over here on WordPress, and I must say, it is already so much better! I won’t bore you too much with the behind the scenes stuff, but I hope that you enjoy this new site as much as I enjoy publishing on it. You may notice a few little changes here and there over the next few days. There are a couple of links that don’t work and photos that aren’t transferring as they should, but it will be fixed soon!

So what have we been up to lately? We’ve spent a lot of time with family and had quite a few fun little play dates. These are what are keeping me from losing my mind these days. I can tell that the girls are starting to get bored at home because they were not listening, fighting with each other, and just plain old acting out.

Once I realized the reason they’re acting out is because they’re bored (after I got past my frustration of how they could possibly be bored with all these toys in the house) I decided to schedule some morning outings (just us), as well as some play dates with friends.

Our preschool families group at church gets together once every month for a group play date, which I love so much! It’s such a great way to get to know other moms and let the kids run off some energy. This month we went to the park. The kids had fun with their friends, but Raley is so my child – she kept coming over to me saying “Mommy, I’m sweaty!” Sorry bout it, girlfriend. Go play with your friends. 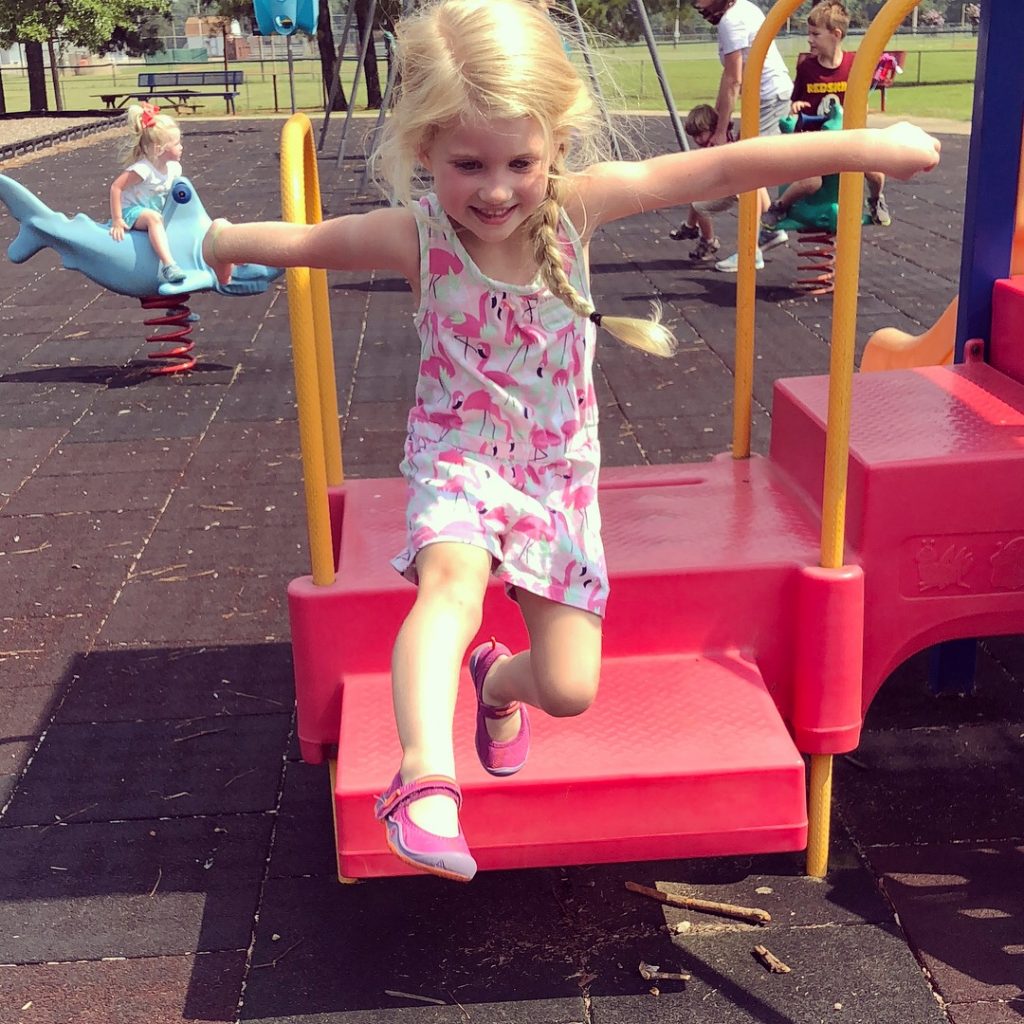 I’ve been wanting to get out to the greenway all summer, but haven’t found a great time to go. Thankfully, we had some nice weather and my friend Erica and her girls met us out there one morning. We walked the greenway for a bit then let the kids play at the park. I always have a great time chatting with her, and I know our girls have fun playing together. 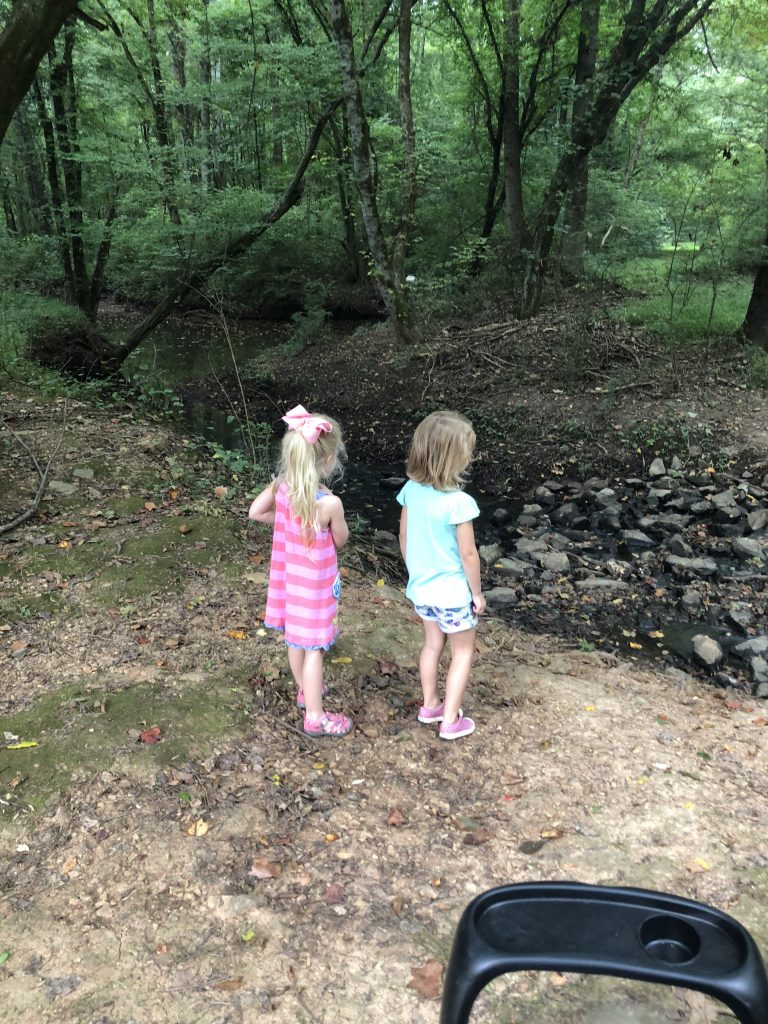 We had not had a chance to get together with Raley’s best friend from school, Tenley, and her family this summer, and I’m so thankful we finally found a chance for these sweet girls to spend some time together. Raley and Tenley have been in class together at MMO since before they were a year old. They’ve become so close and have formed the sweetest friendship. Tenley is going to a different Pre-K program this year and it makes me so sad for these girls (it’s silly, but I start to tear up when I think about Raley not getting to see her best friend every day.) I know that this is something that is going to happen more and more as they get older, and I had no idea how hard it would be! I hope that we can continue to stay in touch and these girls can continue to be friends, because they love each other so much! 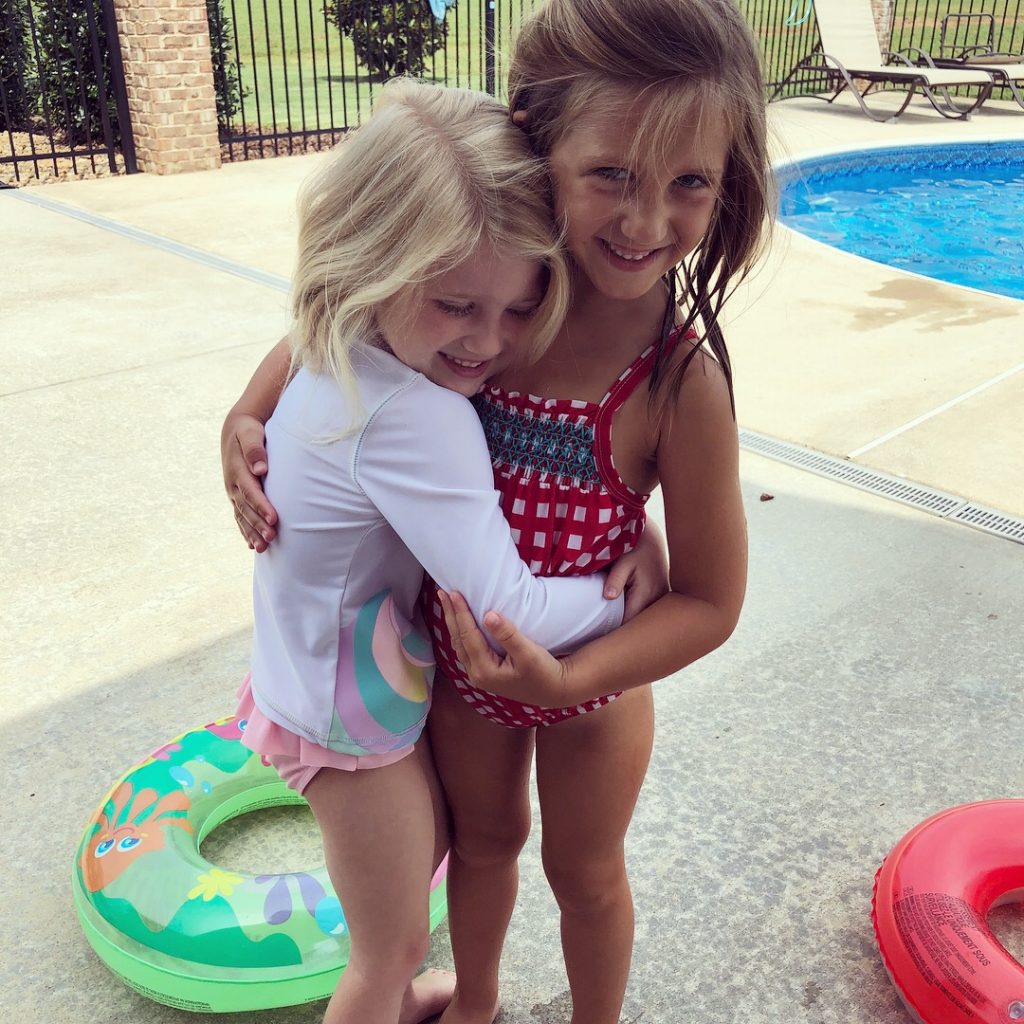 Last weekend all of my siblings decided to come in to town. We played corn hole while the little cousins played on the swing set, ran around outside and caught fireflies (and wouldn’t you know, I got zero pictures of the cousins this weekend! How unlike me!)

This was the first time we’d seen my niece, Addy, since her second cochlear implant surgery. It’s incredible the things that she has caught on to after only being able to hear for 4 months! She makes animal noises, dances to music, and can say her name, Mama, and a few other words. And she has the most adorable belly laugh I’ve ever heard! This girl has always been so smart and I cannot wait to see the places she’ll go!

We spent a good portion of last Saturday over at David’s parents’ house to celebrate his dad’s birthday with his parents and sister (Lindsey) and brother-in-law (Brian). David and Brian helped his dad (Pops) put the beams up on a pergola that he is building. Then David and Pops took Raley down to fish in their pond for a bit. It’s pretty cute seeing her out there with them. She almost caught one, but it got off the hook!

This past week I talked David into playing hookie from work and going with the girls and I to Point Mallard Water Park in Decatur. It’s been years since we’ve been and we wanted to take advantage of the last half priced week of the summer. Boy did we have a blast! 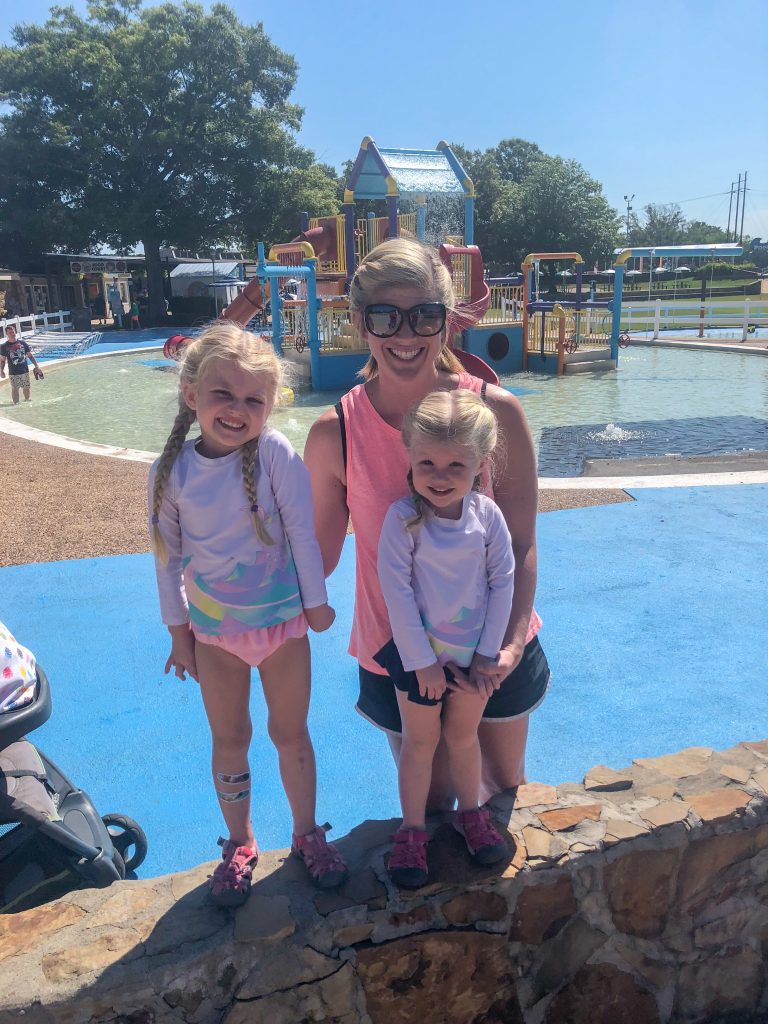 It was one of those days that was so fulfilling that we didn’t want it to be over. The girls actually behaved and listened very well (only one time out for Audrey.) It’s so nice when you don’t have to constantly get on to them for things and repeatedly tell them “no” or “don’t do that.”

When we ask Raley what her favorite part was, she says “All of it!” They splashed in the kid area, swam in the “big pool” and the lazy river (they wouldn’t be lazy with us), jumped in the wave pool, and Raley even jumped off the diving board! She was a little hesitant at first, because it went out further than the one at swim lessons did, but she got more confident the more she did it. I am beyond proud of how well she is doing swimming! 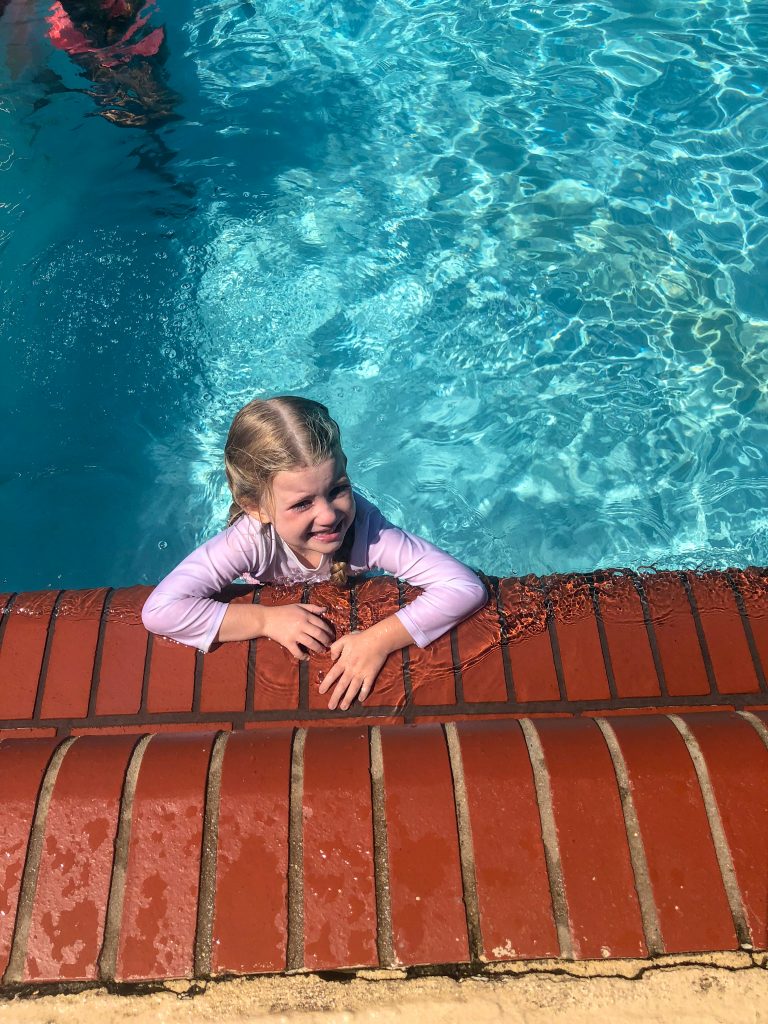 My problem with enjoying times like these is that I have trouble just living it in the moment. I am constantly thinking where are we going to go next? And honestly, I hate this about myself. Because once it’s all over, I’m sad, and I wish I had just enjoyed it while it was happening more…just let myself watch them swim and splash without thinking ahead. This is a day that I wish I could relive because, although we were all tired by the end of it, our tanks were full from allowing the girls to have such a fun experience and creating such positive memories for all of us. 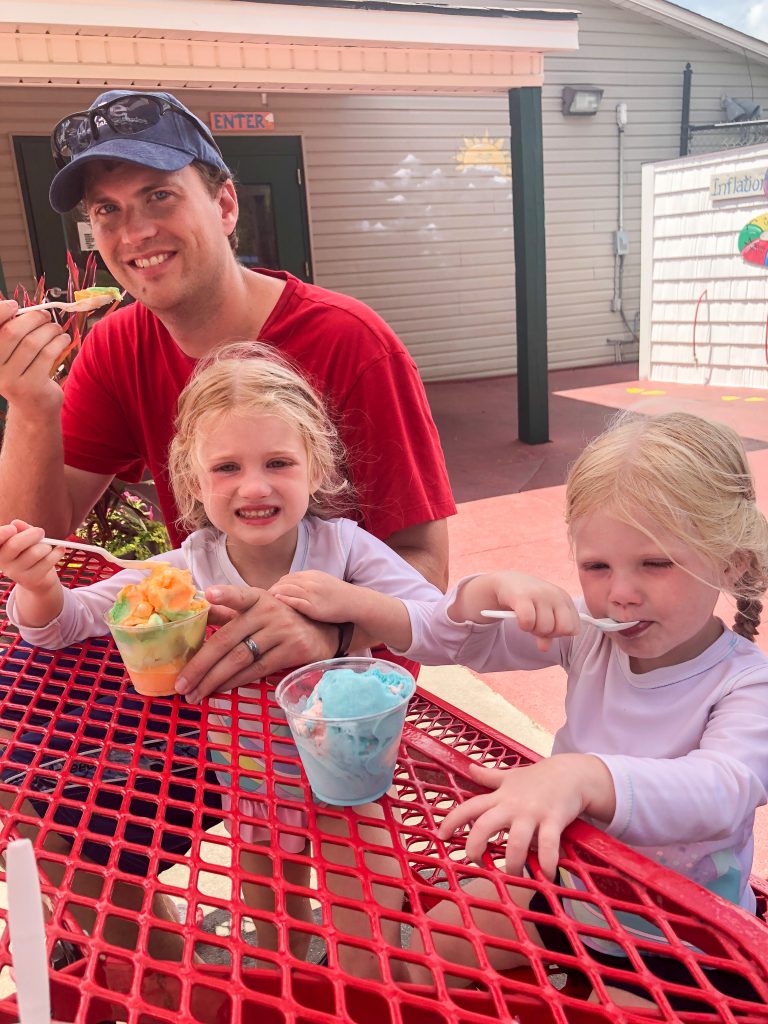 Raley has been asking and asking and asking to go to Let’s Play just about all summer, and I’ve been avoiding it like the plague because it had been a mad house. But now that most kids in the area are back in school, I figured it may not be as busy anymore. We met my friend Maegan and her kids up there one morning last week, and it was not busy at all! The girls had a great time playing together and Maegan and I had some catching up time.

We went to eat at Shaggy’s afterward, and Raley wanted to snuggle “Ann-Elise’s baby brother.” Her love for babies is so so sweet (although she can get a little too affectionate sometimes!) 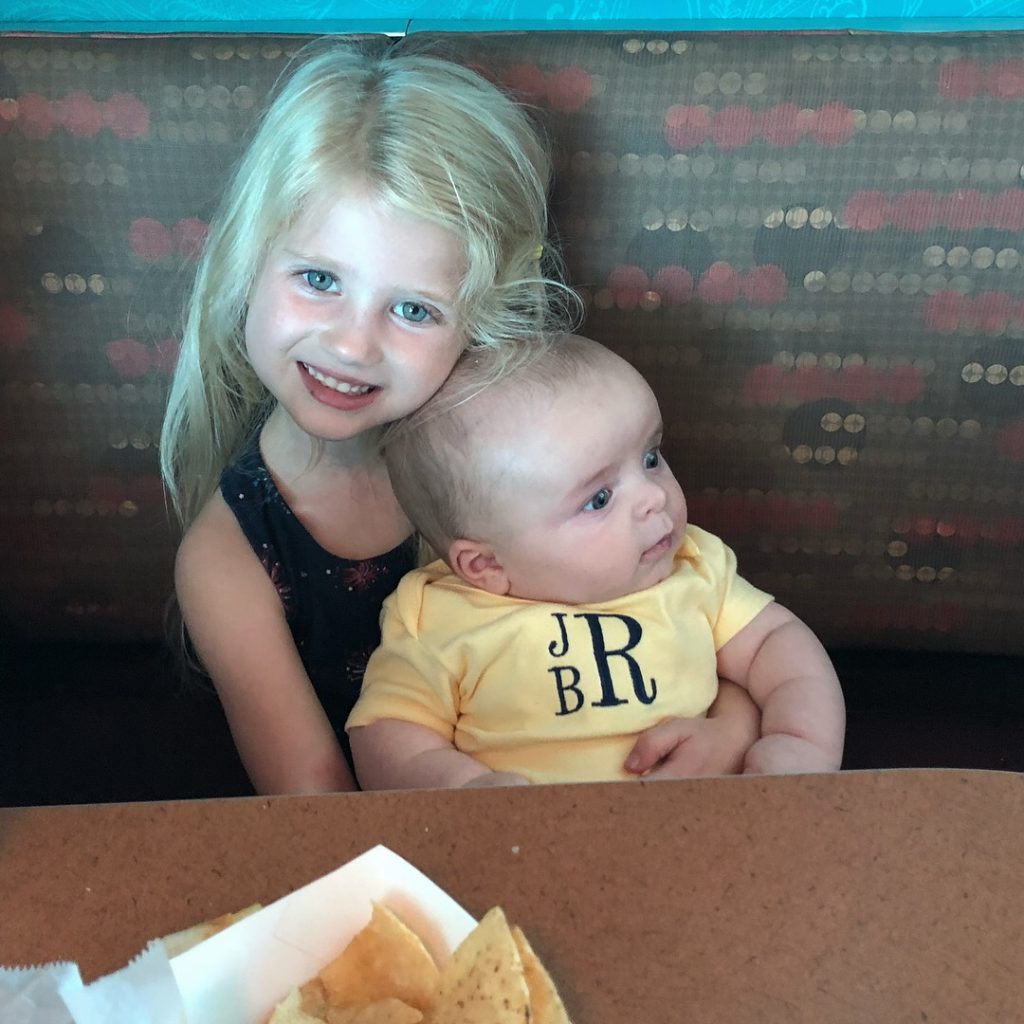 This past Saturday we did some evening swimming at my parents’ house. I got the girls to let me lift them in the air like cheerleaders, then they wanted to do it over and over again. I’ve found that Audrey is quite a bit lighter than she was with her puddle jumper on and Raley has found that she can do so many more fun tricks in the pool when she’s not afraid to go under water. I enjoy watching these girls swim so much!

And finally, we rounded out the weekend at dinner with some great friends after church Sunday night. Maegan and Addison came in to our lives a couple years ago, and we are blessed to call them friends. Our girls are pretty much the same age (Ann-Elise and Raley are exactly one week apart) and it’s been sweet to watch their friendships grow as well. 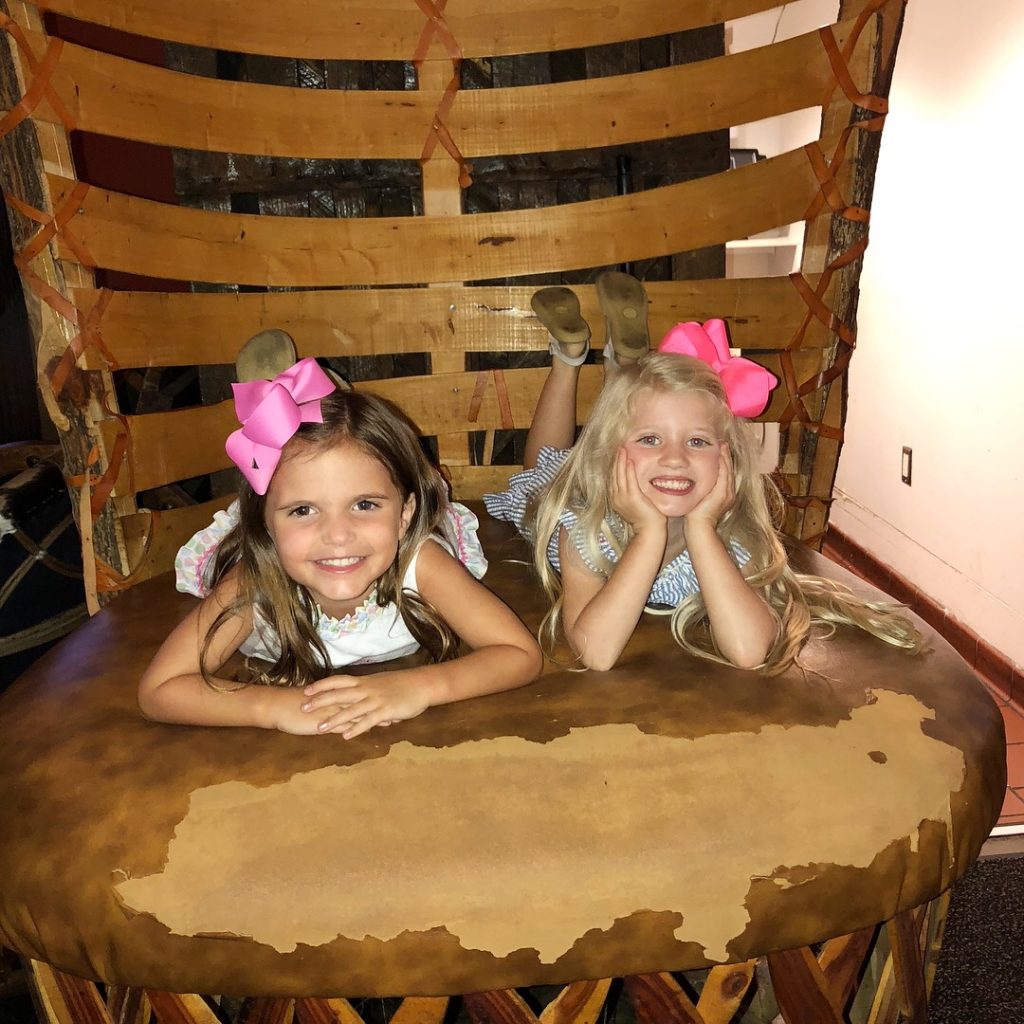 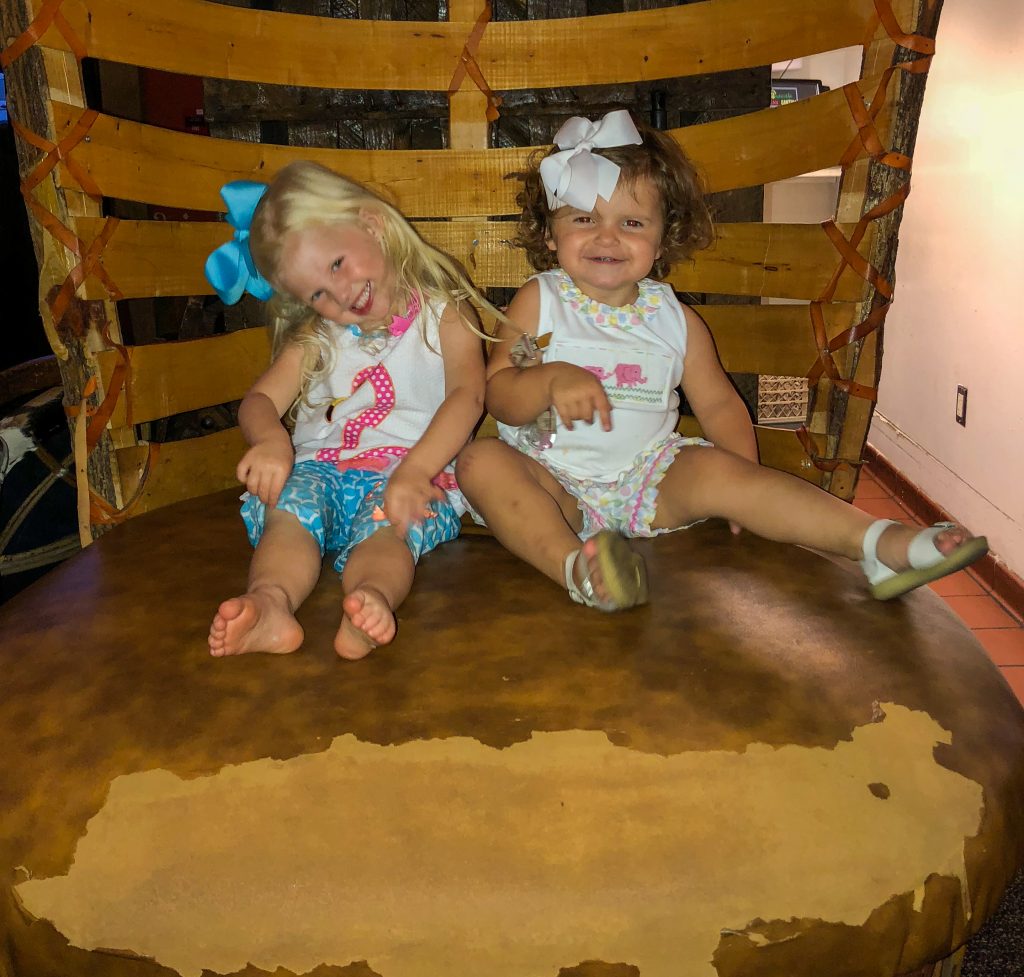 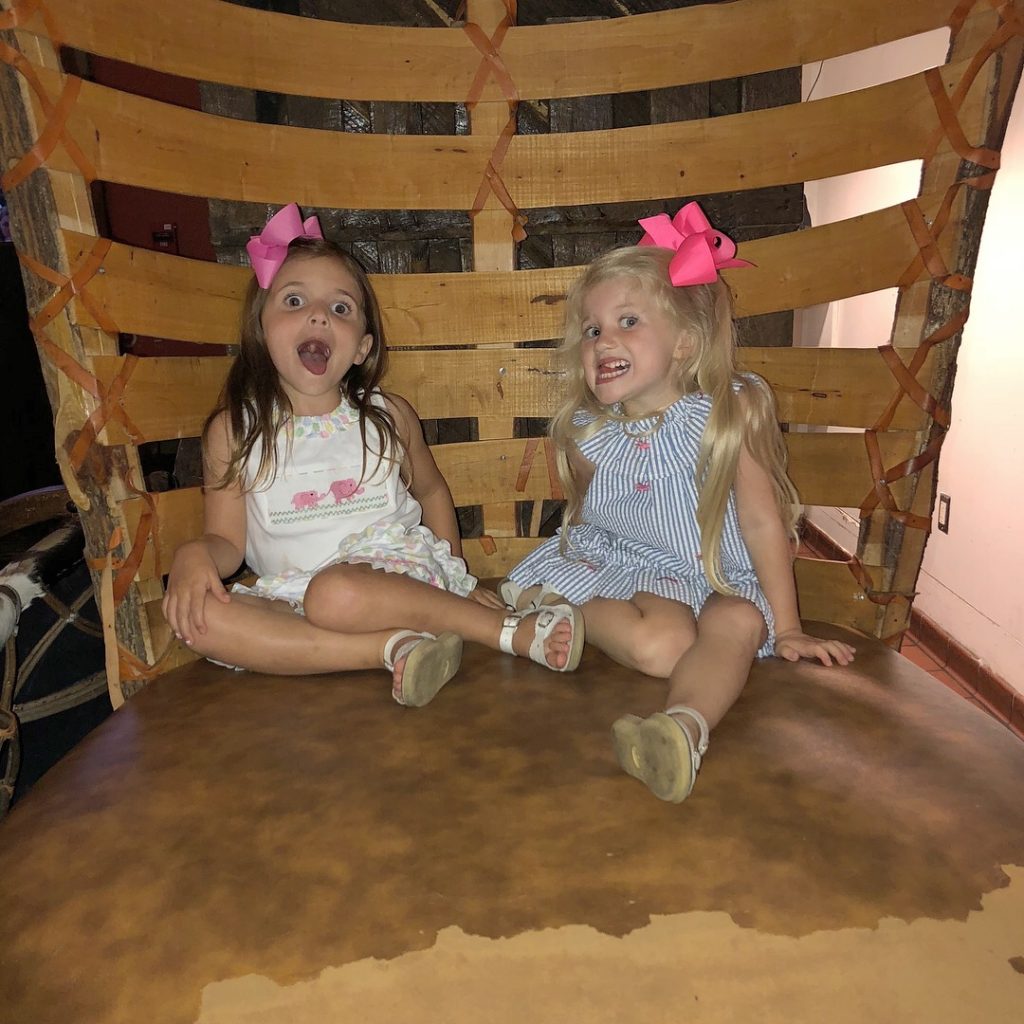 That’s it for this little bit of Life Lately! If you enjoyed this post and would like to catch up with other happenings in the Tenneson world, you can find them all under Our Little Family. Have a wonderful week! 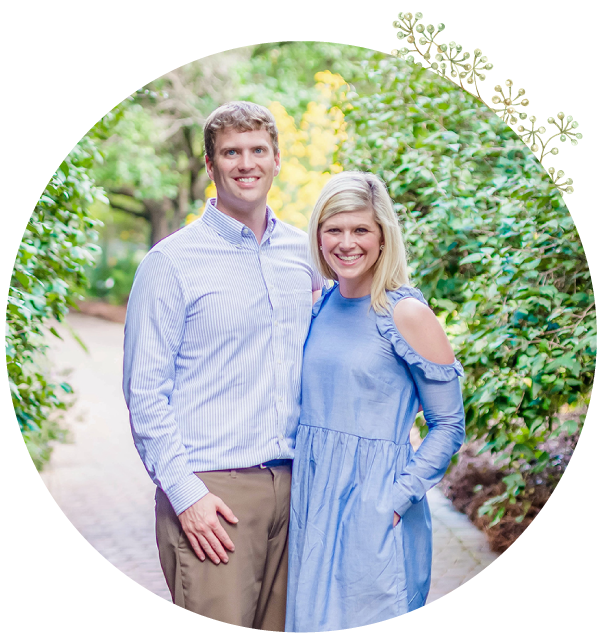