It’s been a couple months since I’ve made some #confessions over here. Today I’m going about it a little bit differently. This is the “Get To Know You” edition of Coffee Talk Confessions. Through these you will learn a little more about me personally (not just that I love pumpkin spice and hate washing my hair.)

Ok, so let’s get to it! These are my confessions…

//I’m the oldest of three children. My brother, Brian is 3.5 years younger than me and my sister, Kayla Beth is almost 9 years younger. When my sister was little (like 3 or 4) I would dress her up in my old dance costumes and make her pose for pictures like my little life size Barbie doll.

//I also loved to fix her hair. For one of Brian’s travel baseball tournaments, I spent 2 days braiding her hair in cornrows with blue and yellow beads at the end. She hated it because it hurt her head, but she sat there and let me do it and it looked stinkin’ adorable!

//David and I met on his 16th birthday at a church retreat in Gatlinburg. He came as a visitor with a guy friend of mine from the youth group. We hit it off over that long weekend spent together BUT…..he had a girlfriend at the time. I gave him my number anyway, you know, “just in case.” That summer he and his girlfriend broke up and he called me up. We went on our first movie date in June 2004 and the rest is history!

//When it came time to decide on a college, David knew he was going to The University of Alabama – there was no question about it. I had a small scholarship to UA, but I had a larger one to UAB in Birmingham. My dad really wanted me to take the scholarship to UAB (for obvious financial reasons), but he ultimately left it up to me. Of course, I chose Bama and to this day I believe that this is one of the best decisions I have made in my life. #rolltide 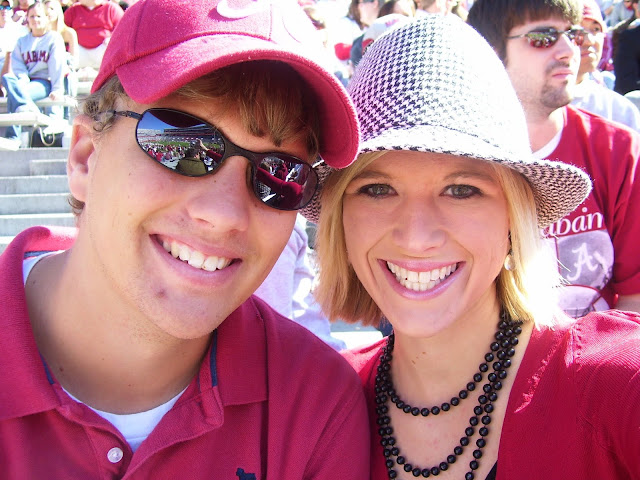 //When I tell people what sports teams I root for, sometimes they get a bit confused. So allow me to explain! 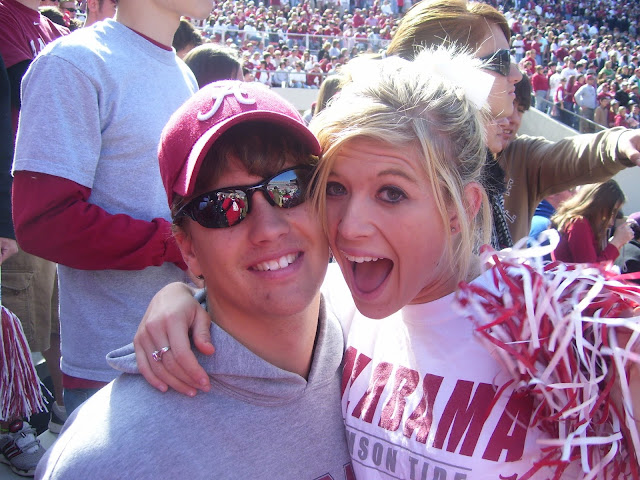 //Another note about football. I know they say “never say never,” but I’m pretty confident that I will never ever root for Auburn football ever. It’s a bit frustrating to me that if, say, Auburn is having a good year – like the 2013 season, when a team from Alabama was playing in the National Championship game for the 5th year in a row – and some Alabama fans pull for Auburn because they want to “keep it in the state” or “keep it in the SEC.” I don’t get this…like, AT ALL.

–I thought maybe this made me a bad sport so I asked around. Many of the people I talked to (especially those who actually attended the school they are so passionate about) said that they do not root for their rival, especially in National Championship situations.

–So what about you? Is there ever a time when you would cheer for your biggest rival? I truly want to know!! Am I being petty here? Because W** Ea*** are two words that I absolutely will not say (I couldn’t even make myself say them when my brother played baseball at Auburn! Sorry, bro. Love ya!) 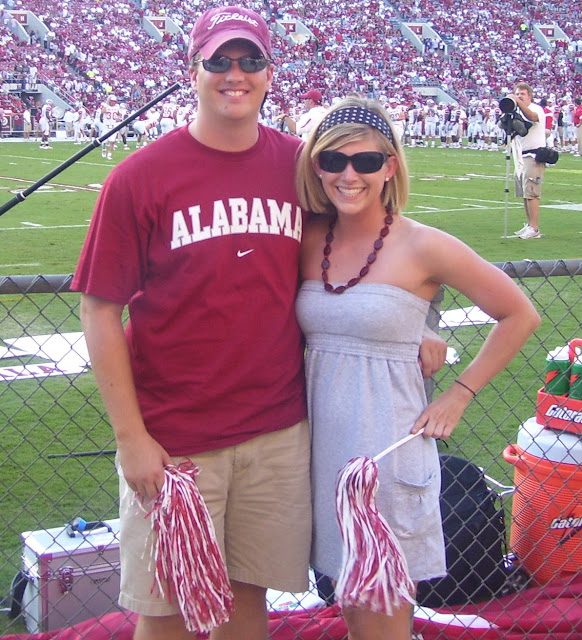 //Let’s talk about something other than sports! Did you know that taste buds can change when you’re pregnant? After being pregnant with Audrey, I can’t drink sweet drinks as much as I used to and spicy foods (which I LOVE!) seem more spicy now than they did before. I used to put cream and sugar in my coffee and drink lots of Sundrop. Now I can barely drink carbonated drinks because they’re too sweet and I drink my coffee black.

//I could sit outside all day if the weather is right, but when it’s hot, I am just not an outside person. If there’s a reason I’m outside – the zoo, the park, the beach, golfing – then I’m fine. But I just do not enjoy sitting outside just to sit there and sweat. I always end up tired, with a headache, and plain old grumpy. Just not my thing.

//If I ever feel overwhelmed by something, I have a tendency to just shut it out and forget about it. If I can’t find a way to organize my mind, I will get nothing done.

//People think I’m weird when I say this, but my favorite part of having a baby is having a baby. Pregnancy and child birth are two things that probably will never happen for me again (which makes me quite sad when I think about it too hard). I loved being pregnant. Both of my child birth experiences were actually very pleasant (thanks to some incredible nurses). Holding my babies for the first time are 2 of my very favorite memories. My favorite new baby stage is when they’re teeny tiny and just want to sleep and be held. This is the part I wish I could relive over and over again, but I absolutely cannot see myself with 4 or 5 Raley’s and Audrey’s running around!

//David and I both thought we really wanted boys. Actually, at one point I thought I only wanted boys. Like a bunch of them. I totally saw myself as a boy mom, carrying them to all their different sports practices and spending every weekend at the ball field. But God knew me better than I knew myself, because these two little girls are exactly what I needed. Now, if you ask me if I want a boy I’ll say “nah, I think I’m good.”

Let’s chat!
What about you? Got any confessions? Is there ever a time when you would cheer for your rival team (in any sport, not just football)? What’s your ideal outside temp/season? What’s your favorite baby stage? If you’ve been pregnant before, did your taste buds change at all? Drop your confessions below!