Good morning! I wanted to share a little bit of what’s been going on in our lives lately and a quick potty training update. (Spoiler alert: she’s doing so much better than last week!)
We’re back in a routine of splitting our time at home and out-and-about, which I love, because I was getting a bit stir crazy staying at home potty training all week long! On our days at home, I try to go with the flow and do what the girls want to do. That may be going for walks, playing outside, playing with play-doh, playing upstairs in the play room, watching movies, painting, or coloring and drawing pictures. Whatever it may be, I try to say yes if possible, because why not? It’s their summer, they might as well enjoy it!
One day Raley asked if we could get out “the blue thing that you play with outside that has water in it” so we threw on swimsuits, put water in the water table and the little pool and had a ball. I’ve had this little pink pool since Raley was about 9 months old and I think it’s time for a bigger one! I lost count of how many times I had to put water back in it because they had splashed it all out. 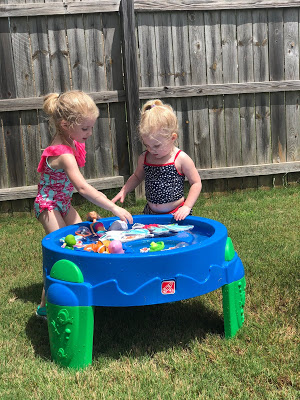 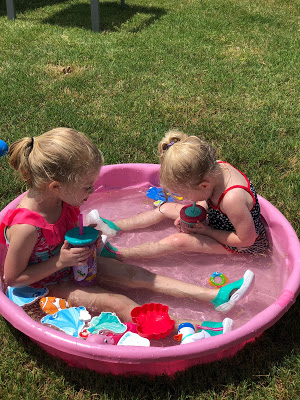 Our friend Derek from Memphis was in town over Memorial Day weekend, so we spent the weekend with him and our friends Casey and Britni and their kids, who are close to Raley and Audrey’s age.

We spent that Saturday at my parents house swimming, eating pizza by the pool, playing corn hole and watching the kids play in the yard. When I think about an ideal summer day, this is it! 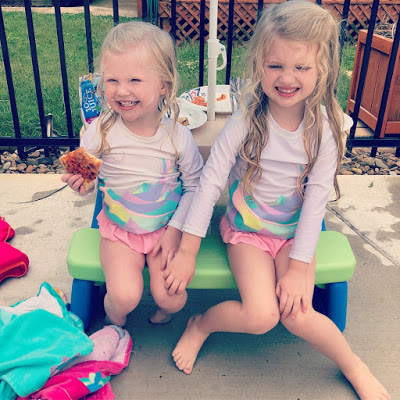 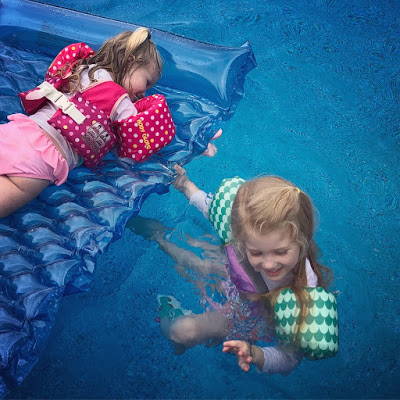 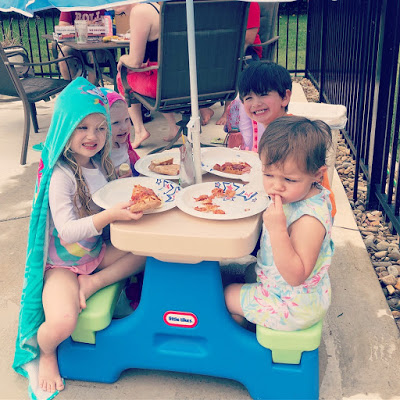 Last year we took a picture of Derek trying to hold Raley, CJ and Audrey so this year, since Cecily is bigger, we decided to try to recreate the picture with all four. This is the result ? 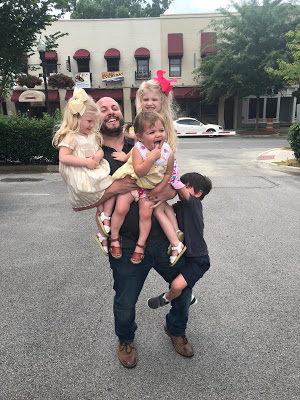 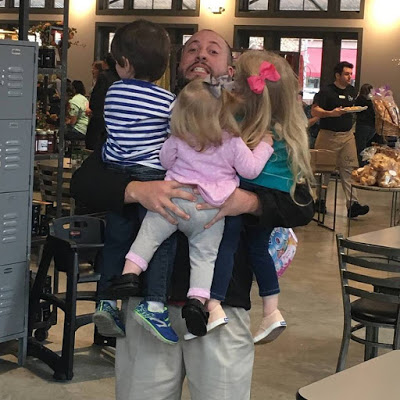 We also spent Memorial Day at the pool with my sister and her husband. It ended up raining on us, but we got a couple hours of pool time in before grilling up some burgers and eating watermelon in the garage. 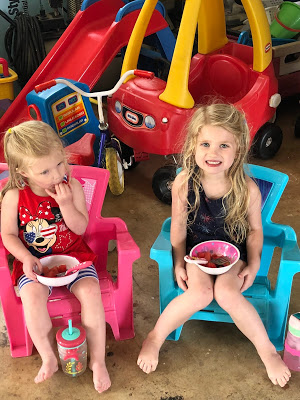 I love finding pictures like this of Raley on my phone. It cracks me up every time! 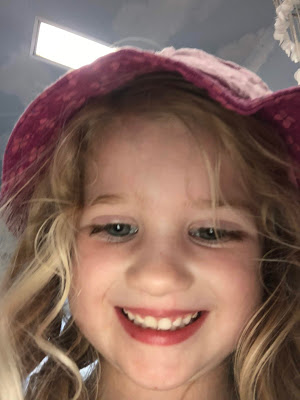 We spent the evening watching Home under a fort. Sitting on the ground like this kills my back, but family fort time is worth it! (If you haven’t seen Home you should! It’s a super cute movie and Jim Parsons as the alien is hilarious.) 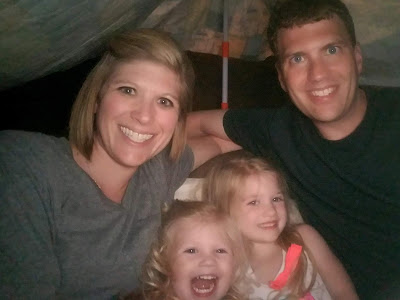 Audrey filled up her potty chart so as promised, I took her to Target to pick out a toy. We only do this every now and then and we always set a spending limit because I’m not buying a $30 toy each time she fills up a potty chart. She ended up choosing a little stuffed Hei Hei from Moana, which I thought was adorable and hilarious. She keeps saying “Hei Hei makin a silly face! He so funny!” 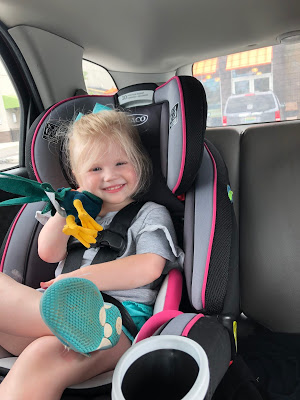 We of course had to get us some donuts on National Donut Day. They both chose the ones with blue icing (of course) which made a huge mess, but hey – it’s Donut Day! 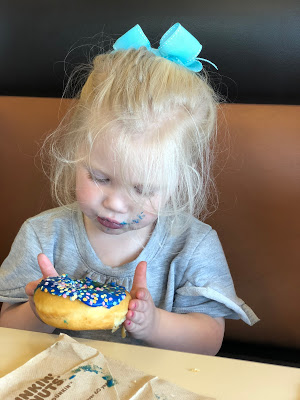 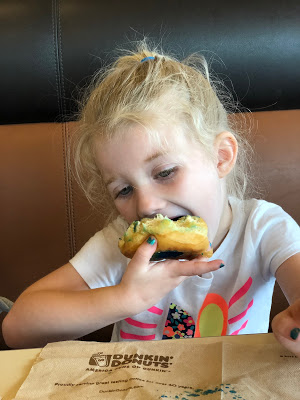 On Saturday we had a birthday party in the morning at Let’s Play. David had been wanting to find a time for a Daddy/Daughter Date with Raley, so he decided to take her after the party. They ended up spending almost 3 hours at Altitude Trampoline Park! I had taken Audrey with me to do some shopping, eat lunch, and get shaved ice and I realized I hadn’t heard from him in a while. Audrey and I were heading home before they got done jumping! They had a blast together and when Raley got home she told me “we played at the trampoline place for a very, very, very, very (add about 10 more very’s) long time!” He took her to Steak and Shake for a late lunch and he told me he was planning on splitting a milkshake with her. But she sweet talked him into her own shake and like every good girl Daddy, he caved. 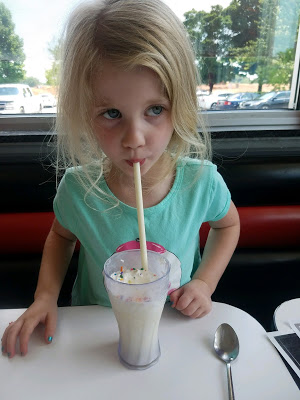 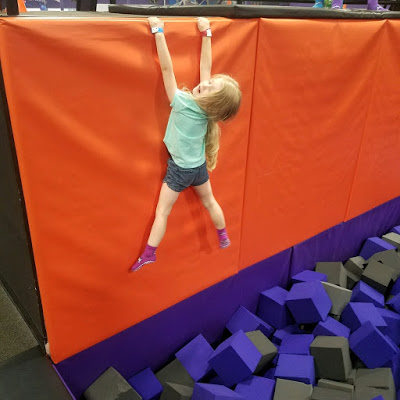 I was excited to get some Audrey time because we don’t get a chance to hang out, just the two of us, very often. We ate at Shaggy’s and I had gotten us some chips and queso to share but she’s used to white cheese dip and was insistent that this yellow stuff that we had was  mustard. So she kept asking me for more mustard for her chips. (ha!) 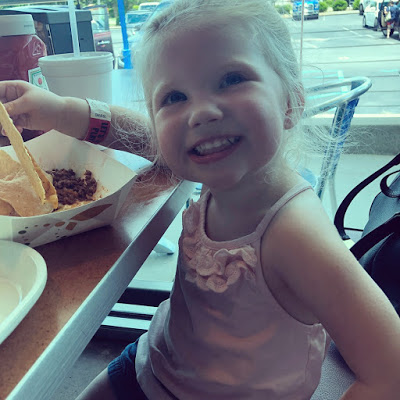 I was so so proud of her going potty during our outing! When we pulled up to Tropical Sno to get shaved ice, she said “I not have an accident” which I’ve learned means “I need to go potty” so we walked across the parking lot to Tuesday Morning, went potty, then walked back to get our treat. 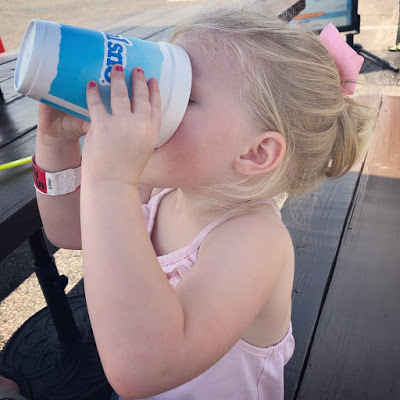 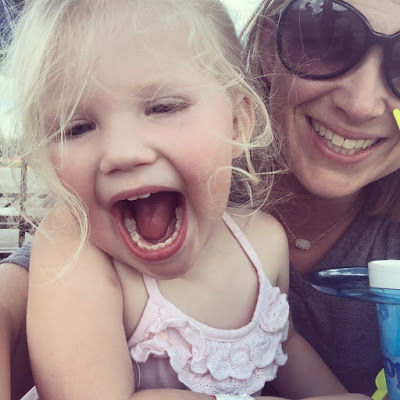 We went to swim at my parents’ house again on Sunday after church. There is just something so adorable about little kids in sunglasses! 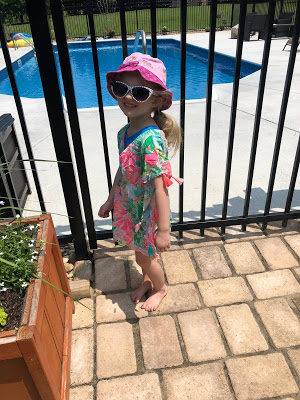 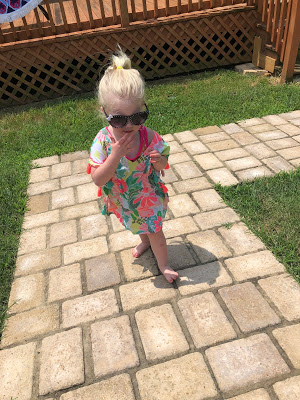 The little goofballs wore these beautiful handmade Hawaiian dresses that my parents got them when they were in Hawaii last week. They are so pretty! (And Audrey is such a stinkin ham!) 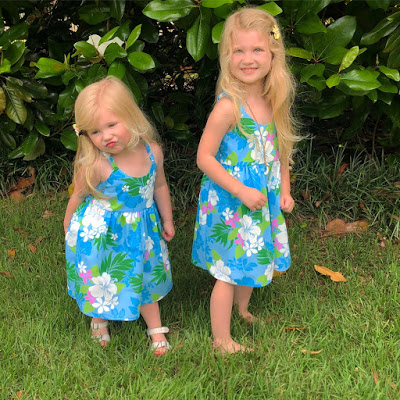 Yesterday we finally got the opportunity to have a play date with my friend Erica and her girls at the Botanical Garden. I have known Erica since high school and we were at Alabama together, although we were never super close friends. However through this whole blogging thing we have been able to keep up with each other for years and we actually talk pretty frequently. I have always admired her writing and she’s been my blogging inspiration for a long time. (She blogs at Whimsical September – check her out!) If you know me in person, you may know that I can be a bit reserved (and let’s face it, awkward) until I really get to know someone well. This is the first time Erica and I have hung out or had a real conversation in person and it felt so natural and as if we’ve been good friends for years. Her girls are almost exactly the same age as mine, and we all had such a great time. It’s so crazy that our love of blogging + being in the same stage of life has allowed me to gain a friendship that probably would not have existed otherwise. 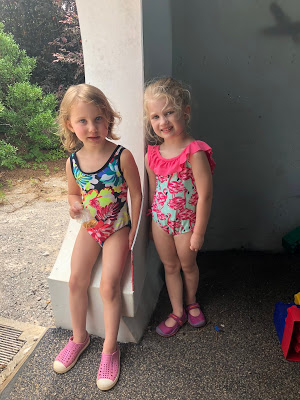 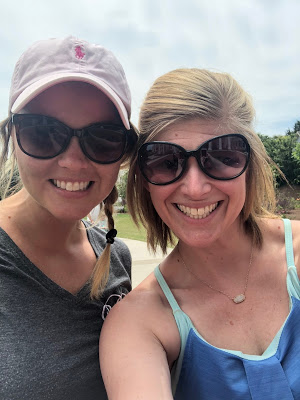 Potty Training Update – Week 2
Last week I talked about how Audrey did week 1 of potty training and I had said that we weren’t exactly where I hoped we’d be. Well, she has done great week 2! I have been able to pick up on a few cues from her that have helped us have more success this week.
For example, if she says something like “I not go pee pee in my panties” it probably means I need to go pee pee. Or if she says “I not get a sucker” it probably means I need to go poo (she gets suckers for #2’s only). She has told us a couple times “I need to go potty” but usually its these subtle comments or cues that make us say “Audrey, let’s go potty!”
We’ve noticed a couple of other improvements this week.
1. When she goes pee pee, she goes more at a time than she was before. She’s able to empty better, which allows her to go longer in between trips to the potty.
2. She’s going #2 pretty much all on her own! Each time she sits on the potty she tries to go poo also, which has led to many successes on the potty and zero accidents in over a week! *knock on wood*
3. With the exception of wearing either pull ups or swim diapers during a couple of play outings, she has worn panties and stayed dry when we are out. She’s worn panties to church, out to the store, and out to eat, and she has done a great job going potty in the big potty when we’re out!
We still put her in swim diapers at the pool. I do not want to contaminate my parents pool so until we’re further along she will still continue to wear swim diapers. It may be a bit redneck, but we brought the little potty out to the pool so she doesn’t have to dry off to go inside each time she needs to go potty. It’s pretty adorable! 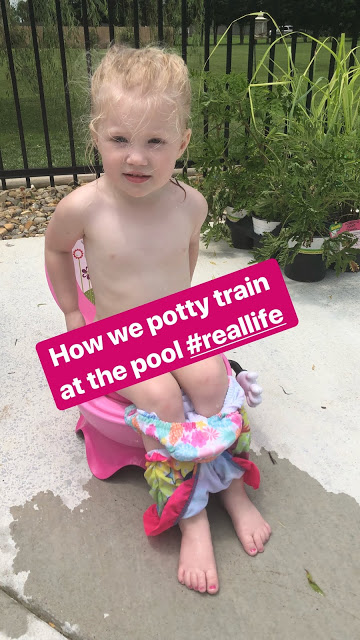 So overall, we have seen a vast improvement over week 2 and we are thrilled with how well she is doing!

That’s it for now! Anything exciting and fun been going on with you? I’d love to hear about it. Have a great rest of the week!

What activities do you do with your kids at home to pass the time? Did your child have any indirect, subtle cues that indicated they needed to go potty?

For more posts like this, visit the Life Lately Archive