Last week while I was doing a little clean up on the blog, I realized I haven’t been very good about keeping up with these “Life Lately” posts. I originally hoped to post one every month to keep my readers updated on what’s going on around here. I also write these for me. I like to be able to look back at old posts years later and remember what was going on at that particular point in our lives. My last Life Lately post was in July, which is an indication of how busy it’s been around here! I won’t post everything that’s been going on since July, because that would just take way too long, but I will talk about what’s happened in the last couple weeks!

The day before we left for our cruise we made a trip up to Taft, TN for our annual visit to the pumpkin patch. I’ve stated before that in the past we have always gone to Tate Farms, but we had heard great things about Lyon Family Farms as well, so we wanted to give it a try. One review I read on Facebook stated that their family spent all day there from the time they opened in the morning until 4:00 in the afternoon. I thought to myself there’s no way we’ll be there that long. Well, I was wrong! We got there around 10:30 and didn’t leave until 3:00. And there were still things we hadn’t done yet plus a few the girls wanted to do again! I am so glad we were able to make time for a favorite fall tradition. I would have been pretty bummed if we had to wait another year for the fun!

This place is humongous and there is SO much to do. There’s a hay ride out to the pumpkin patch, a petting zoo where you can feed/pet animals such as donkeys, horses, pigs, cows, goats, sheep, and more. They have super cute pig races several times throughout the day. There is a train ride, that we ended up not having time to do, several huges slides that my girls loved, bounce houses, a zip line (Raley rode it by herself and looked like such a big girl!), a few different playgrounds, a huge corn maze, corn pits, and so much  more! They also have Pumpkin slushies, which are so good!

Audrey was hilarious when we were trying to pick out a pumpkin. She kept walking up to them and petting them saying “punkin soft.” It was cracking us up!

I think their favorite thing this year was the big slides. They also loved strolling around the corn maze. Raley liked to lead us through and decide which way to go.

We were able to purchase a huge cup of animal food (I think for like $2). Audrey kept taking a handful and just dropping in the pens instead of letting them eat it out of her hand, but there was still plenty to go around! These animals were beautiful. 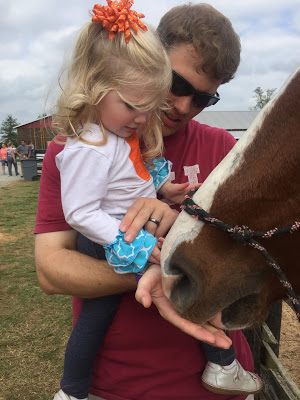 This was David’s first year to get to go to the pumpkin patch and we are so glad he got to join us! I think he had almost as much fun as they did.

After making it home from the cruise we spent the next couple of days trying to take it easy and catch up on some sleep. We spent a lot of time like this:

However, I was scheduled for surgery that week. My IUD had shifted out of place so they had to put me to sleep and laparoscopically remove it. I was admittedly a little bit nervous about anesthesia because of all the horror stories you hear about people having a reaction and not waking up. But God was with us, as he always is, and everything went fine.

My parents kept the girls for 3 nights so that I could rest. Plus I wasn’t supposed to lift over 20 pounds and with a strong-willed 1.5 year old that’s an impossible order to follow. I was very thankful for my family’s and David’s help in the days and weeks following the surgery because I ended up being much more sore than I thought I would be.

Besides sleeping, here’s a glimpse into what the parents did without kids in the house. I think we need to make grandparent sleepovers a more regular thing.

My surgery was on Wednesday and Friday was the girls’ Harvest Celebration at MMO. They were still staying with my parents so my mom brought them to MMO with her that morning and I met them there for the party (I’m not sure if I’ve mentioned before, but Audrey is in my mom’s toddler class at MMO, which is so great!) I love how their costumes turned out this year! Last year for Christmas Raley got this adorable Alice in Wonderland costume from the Disney Store and it was decided then that she would wear it for Halloween.

I LOVE family costumes so Audrey had to be the white rabbit. I wanted her to look cute and girly so I put together this idea. She’s wearing a red shirt under one of Raley’s dance leotards with a tutu. My Granny made the white piece with the heart and the blue collar. I think she looks perfect. Although those ears came off quickly.

The girls got to walk around and trick or treat with the church staff and then go upstairs and play games.

I love seeing Raley with all her little friends!

As soon as the Harvest Celebration was over we all hopped in the car and took off for Atlanta to celebrate my niece, Payton’s birthday. That night we went to an event at Kennesaw State called Owl-O-Ween, and the girls got to dress up again. There were hot air balloons, bouncy houses, people handing out treats, several vendors, stages with performers, and more. There were a ton of people there! More than we expected, so it made it a little difficult to get around, but we had alot of fun in the kids’ area. The girls had a blast!

There were little photo booths set up that you could take pictures in front of.

The next day was Payton’s Beauty and the Beast birthday party. Shannon did a great job with everything! It looked so cute.

Our attempt at a picture with all four girls proved unsuccessful.
I am so glad that we were able to make this trip to Atlanta and spend time with family for the weekend.

Sunday afternoon we made our way home just in time for evening church service and the Trail of Treats afterward. This is one of my favorite events because we all get to dress up and walk around and visit with people from church. It ended up getting pretty chilly that night, but the kids didn’t seem to mind! Raley played on the big blow up slide for probably 30 minutes and had a blast.

Like I said, I love family costumes, so it was only fitting that I be the Queen of Hearts and David the Mad Hatter! I ordered my costume off of Amazon. I ordered a standard size and it fit well except for the length. It ended up being about 5 inches too long so I had to pin it up at the bottom. I actually found the crown on clearance at Party City.

I put David’s costume together with items I found at various thrift stores. His scarf was made out of a yard of fabric from Hobby Lobby that I tied in a bow. I ordered the Mad Hatter hat with the wig attached from Amazon. We ended up paying $16.95 for it, which I thought was a pretty good deal – they were selling the exact same hat at a local Halloween store for $30.

On Halloween Tuesday I dropped Audrey off at MMO and took Raley to Dunkin Donuts to get a Halloween donut before dance class. She was pretty excited about it, and so was I – they were delicious and adorable!

That evening my mom and both of David’s parents came over to trick or treat with the girls. I had made some Cream Cheese Chicken Chili (one of our favorite and easiest meals) in the crockpot for all of us for dinner. Then we got dressed up and went out to trick or treat. Luckily we have a ton of kids that live in our neighborhood so there were a lot of people out. I love when there is a neighborhood of kids out trick or treating. It makes me feel nostalgic!

We all had a ton of fun, adults included. It is just so fulfilling to see your kids having such pure, genuine fun.

However, Audrey wasn’t quite getting the whole concept. She kept trying to walk into peoples’ houses when they opened the door. She didn’t understand that you should only go to houses that have porch lights on (how could she, she’s not even 2?) but she would get upset when we would steer her in a different direction….but she didn’t want to be picked up and carried either. The poor girl wanted to carry her basket but it was throwing her off balance and she kept falling down. Several times she laid down on the ground crying because we wouldn’t let her go where she wanted to go. She is SO strong-willed and independent, which are good things to be in some ways, but boy does it make a parents job harder! She was still super adorable saying “trick or treat” and she would always say “thank you” without being prompted. And watching her trying to carry that big bag by herself was cute too.

Raley looked like such a big girl walking up to houses on her own and ringing doorbells. She didn’t need us right by her side every time.

We had such a fun time and I’m glad the grandparents could share in the fun! I had hot apple cider waiting in the crock pot when we got home. The temps dropped very quickly so that warm cider hit the spot!

I always get a little bit sad when Halloween is over. I love the decorations and I love dressing up! The month of November is going to be a busy one with a good bit of traveling, but we’re hoping that we can slow down a bit in December and just take in the joy of the holiday season.
I’d love to hear from you! What are your favorite things to do in the fall?
For photos from Halloween the past two years and other similar posts, visit the Life Lately Archive!
If you’re in the Madison/Huntsville area and would like some information on events going during the holidays, check out this post.